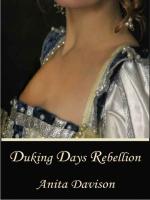 I had been eyeing your book “Duking Days Rebellion” at Fictionwise before you offered it to Dear Author for review. It was actually on my wish list there just waiting for my next paycheck when Jane forwarded me the review request. Talk about nice timing! It took me back to my early days of reading historical fiction before I got back into reading true romance books.

I was somewhat familiar with the facts concerning the 1685 uprising against King James II by his bastard nephew the Duke of Monmouth having read several books using it as a backdrop. This book placed me right there not only during parts of the short battle but also in the afterwards. Mentioning the persecution of the French Huguenots by Louis XIV was a nice touch to show what Protestant Englishmen would be afraid Catholic James would force on them and to suggest the reason so many were willing to risk everything to remove him from the throne.

When Helena initially began her search with Nathan Bayle for the fate of her three relatives after the fighting was over, I had an “oh no, don’t let this be a feisty moment” prayer. You answered with scenes that showed the tension, fear, uncertainty, horror and grief being felt throughout the area. Even those who hadn’t partaken in the rebellion nor had any relatives who had done so still had to endure what followed as rebels were strung up and left to rot as a deterrent against further treason.

At first glimpse it would almost appear that Helena and her brother Henry got off fairly lightly to be the children and siblings of known rebels. They have a place to live and their father’s foresight in transferring some property to a friend would appear to have provided at least some income and future for them. But as shown in subsequent events by no means did they escape all consequences of their father’s and brother’s acts.

I understand Helena’s anger at her father, brother and uncle – she supports them as people but I can easily see being furious at them for exposing the rest of the family to harm. Not only their estate was lost but also the family’s place in society plus their mother died while troopers ransacked the estate. And after they begin to carve new lives for themselves both are amazed then angered at their rebel brother Aaron for staying in Holland and refusing to accept the royal pardon, an act which increases the risk of further repercussions to Helena and Henry.

I enjoyed the scenes in which Henry discovers his passion for architecture as he watches St Pauls Cathedral being rebuilt and learning about the system of apprenticeship he embarks on to become an architect himself. Readers will get a real sense of how parents ruled their children’s lives as Henry has to watch helplessly as his sweetheart is betrothed to another thereby causing him to turn to drink. Poor Henry. I hope you have plans for him.

Helena’s more common sense approach in her choice of husband might come off as cold but it’s understandable for the time and her position. She had been put under strain by the actions of her male relatives and knows she must choose well whom she marries and that she must marry in order to have any position in life. Her brief scare in the form of Lord Blanton’s suit to take over what is left of her father’s property shows the still shifting political scene and that then, as today, it’s always been a matter of whom you know.

I was surprised at the Deveraux family taking Helena and Henry in. Did they know the Woulfe family? Was there a financial benefit to them for doing it? Would they have gotten a tidy sum for arranging Helena’s marriage or from the marriage portions? Were there alehouses such as Lambtons? I was surprised too about how nice it is and that this upper class family would run it.

I think you’ve done a great job at giving readers a real sense of the times. Facts are nicely integrated into the story and serve to enhance it and not just for ‘gee whiz, isn’t this a neat fact I found?’ purposes. The characters seem well rounded with faults and flaws and we can watch as they transition from their old ways as events affect them. Helena learns about the less fortunate and realizes how privileged her old lifestyle was. Henry sees that he’s going to have to come up with a new plan for his career and sets about doing it. We see that it’s so much easier for men to make their way and that Henry has options Helena would never get.

One could stop at this point and have gotten a fairly complete story – our heroine has found a safe haven, she and her siblings are alive and doing well and she’s found a man she feels she can trust and respect — yet there is still a lot to be told about their lives and the turbulent times. And to do that, we must read book two in the series. Which I plan to do. B