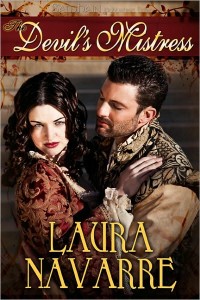 Your bio says you write darker Renaissance era books and the dark theme plus Tudor setting are what attracted me to “Devil’s Mistress.” Oh, and the Italian heroine is an added bonus. I’m always on the lookout for books with other-than-English heroes and heroines. Nothing against the English mind you, but it does get a bit tiresome when they seem to be the only nationality used in European historicals.

Allegra Grimaldi is one miserable cookie. The Spanish Ambassador has kept her on a tight leash for the past three years and used her as his own pet poisoner. Now, with the King of England demanding a divorce from his first wife in order to marry the Boleyn whore, Maximo Montoya has set her next target – Anne Boleyn herself. Allegra is horrified and determined to keep her promise to her dead mother not to kill anyone despite the fact that she, Allegra, is a trained assassin. Anne might be a heretic but she doesn’t deserve to die for it. Allegra’s own mother died in the flames as a condemned witch and she herself barely escaped the same fate.

But Allegra’s deliberately bungled attempt on Anne is witnessed by Anne’s bastard brother Sir Joscelin Boleyn. He alone among the courtiers thronging around Anne realizes what he barely stopped. He also falls immediately under Allegra’s spell and is determined to discover who this woman is and what her secrets are. But once he knows, will he be able to do what his powerful family demands as his price to join their ascension in the Tudor court or will he choose to love a woman accused of killing her husband and who is now called the “Devil’s Mistress?”

Is there a book set at any of the Tudor monarchs’ courts which doesn’t make them sound like snake-pits filled with back stabbing creatures? Probably not as it seemed the only way to secure your place and make your fortune. The only way up was by planting your feet on those weaker than yourself as you jumped for the King’s attention. It’s all artifice and polite, polished manners while you sharpen your blade which you make vividly clear. And Allegra seems to have perfected her courtier’s “face.” I think you do a great job at showing the strain she’s constantly under to not reveal anything to either Montoya, who’ll use it to punish or cruelly toy with her, or Joscelin whom Allegra can’t trust despite her growing interest in him. She’s playing so many roles and lying to so many people it’s a wonder she can manage to keep it all straight much less not crack under the strain.

The conflict of the story – between those who support the Boleyns and those who support Katherine of Aragon and the Catholic Church – is brought down to a visceral level for and between Allegra and Joscelin. Both have their reasons why they need the question of the King’s divorce to be settled one way or the other and both are given ample reason not to trust each other. You twist their loyalties and obligations into a tighter and tighter coil until I knew that someone would have to break from their past convictions in order for them to find their HEA. I also couldn’t help but think that their final destination is a smart move given Anne Boleyn’s rapid fall from the heights.

But as much as I enjoyed the setting of the book and the tenseness of the conflict, Allegra and Joscelin don’t totally work for me. At this point in my romance reading, the martyr heroine tends to grate on my nerves and I never did see Joscelin as half French and raised in France. Given what Allegra survived when she was interrogated after her husband’s death and that she has a delicate conscience, the fact that she would choose to undergo training in the art of poisoning and death is a bit odd and never sat right with me. Joscelin comes across as too much of a bluff, hearty type instead of someone who’s been at the French court and done some diplomatic service. I guess I expected him to be more sly and calculating like Anne and less impulsive like Mary Boleyn.

The denouement of the story was too melodramatic and OTT for me. The fight scene, layered with the fire on top of Allegra’s determination to tie herself to the railroad tracks had me skimming to the end. The resolution of the Allegra/Montoya relationship earned an “oh, please!” I know that forgiveness is probably the best policy and it does make sense given Allegra’s temperament. I guess I’m just too bloodthirsty and you created such a delighful villain in the invented Montoya who I wanted to see pay for all he put Allegra through. Also, I couldn’t get the “mostly dead” sequence from “The Princess Bride” out of my head in relation to Montoya’s appearance at the end.

Balancing what worked for me with what didn’t, I end up with a C. And obviously the things which bother me might sell the book for many others. Right now, I’m sure you’re disappointed with the grade but there’s enough I like about the book and your writing style to say I’ll be back to try more.

→ Jayne
Previous article: First Page: Untitled Regency
Next Post: Dear Jane: Are we really getting $100 worth of free books with an eReader?