After my less than happy experience with your stand alone Gothic book, I was very pleased to see that there would be another Lady Julia Grey – or should we rename it now – book. And what an evocative title it has – “Dark Road to Darjeeling.” It conjures up all kinds of exotic ways to die while the scent of tea perfumes the air. And by the time the book finished, I was beginning to wonder if anyone would survive. 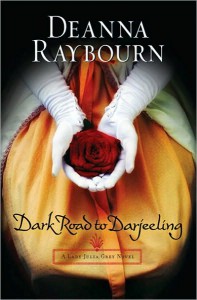 Eight months of honeymooning are quite beyond most of us these days but not for Lady Julia Brisbane and her husband Nicholas. Unfortunately family duty calls in the persons of Portia, Lady Bettiscombe and Plum of the tremendous waistcoats who catch up with the not-quite-so-newlyweds in Egypt with the news that they must all travel to India.

Word has reached Portia from Jane Cavendish that she is expecting and is also now a widow. Portia thinks she’s read correctly between the lines and that Something Untoward Has Happened to Freddie Cavendish which Julia and Brisbane must help to uncover. Soon these two are up to their armpits in suspects, all of whom might have done the deed because, as Julia has discovered during her past attempts at “helping” her husband in his detecting activities, with the proper motivation … anyone can kill.

I laughed at the obvious tip of the hat to the enterprising Englishwomen of the 19th century.

Portia blanched a little at the odour, but stiffened her resolve. “Julia, we are Englishwomen. We are not cowed by a little authentic local flavour.”

Luckily Julia isn’t sickened by her subsequent dunking in Rangeet though her lovely sounding hat will never be the same. The descriptions of the valley in which Jane has come to live after her separation from Portia and subsequent marriage sound heavenly even if it is soon obvious that the place is packed with potential murderers. And I love the name of the estate, the Peacocks, though I’d pass on actually having the resident bird or his rare white peahen.

Since there are big, honking spoilers for the outcome of “Silent in the Sanctuary,” I will say that I hope readers have either read that book or don’t care to know the identity of the killer. Books one and three are still shrouded in mystery, should they remain unread by followers of the series which, may I say, is a feat I’m still very much in awe of.

The mysteries of this book are unraveled slowly as we meet the varied characters living in the valley and learn who they are and how their lives all intertwine. The bombshell revelations of the family ties were dropped precisely but it’s the last one which rocked me the most. It does much, however, to show Julia a great deal about how little she knows and how much she needs to look beyond facades.

The unveiling of the killer is done with slow, dawning horror – not only who it is and why it was done but also who metes out justice – if that is what it could be called. Julia learns first hand that “there was not any best that *was* possible.” You seem to delight in writing about murderers who are the last ones I would suspect and yet who make total sense as the clues are added together. It also makes me feel for Brisbane who has doubtless seen it occur for years as he has had to deal with the dark side of human nature far longer than Julia.

I do want to say that I am delighted that marriage hasn’t turned Julia and Brisbane into simpering love birds. Their spirit of competitive investigating is still very much alive and kicking though I hope that Julia will take to heart the wisdom Portia bashes over her head. These two may love each other deeply but their marital road in this book is not an easy one. Yet, their actions and feelings are in keeping with their personalities of the previous three books so brava for that.

From the way this book ends, I will hope that there are several more mysteries in store for Nicholas and Julia – and one other. As Julia has shown, she does have a talent for certain aspects of sleuthing and with Nicholas ruthlessly instructing her – and that should be fun to read about – she looks like she’ll be a great help once they are returned to England. I’m looking forward to what the March family will get themselves involved with next, and how Julia and Brisbane will get them back out of it – again. B+