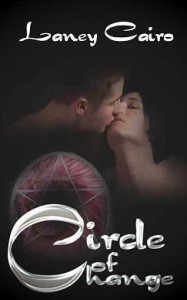 Circle of Change was recommended to me when I reviewed a romance that had a transsexual character. This story has a transsexual protagonist, Kim, a Female to Male (FtM) student (high school, then college). Kim finds love as he enters makes the transition out of high school. I enjoyed following his transformations, but the story was, unfortunately, basically suspense-less, plot-less. There was nothing at stake.

Kim hates high school. There’s nothing but homophobia and hate there for him, but he’s in his senior year and determined to make it out. His mother is a priestess in a local coven that brings in a new member, Dash, who felt the previous coven he was with was homophobic. Kim begins to go through hormonal transition, while Dash begins the process of being admitted to the coven. Dash and Kim feel an immediate attraction, but when Kim comes out as a female-to-male transsexual, Dash quickly rejects him, sending Kim spiraling back into depression for a bit. But Dash’s continued participation in Kim’s mother’s coven brings them back into contact, and they slowly begin to explore a fully sexual relationship.

Once Dash gets over himself, after they get together the second time, the story is “merely” a fictionalized recitation of sex between a FtM and a cisgendered gay man. I put “merely” in scare-quotes because I acknowledge and appreciate the fact that this is not an easy thing to pull off. However, there is no relationship tension, no will-they-or-won’t-they about anything, no barrier for them to overcome. Once they’re together, they’re committed to each other and to their relationship, both sexual and emotional. Which is a good thing. And how it hopefully happens in real life. But as a story, I wanted more tension somewhere.

At the same time as the relationship progresses, we’re following Dash through his full inclusion into the coven. The story takes place over a full year, something which is very unusual in romance novels these days (in my experience), so that was a nice change. But although I read it all the way through and although I enjoyed it, the story really felt like a manual of how to have positive, affirming, fun sex with a FtM transsexual AND how and why to join a coven. It was NOT about the trials and tribulations of a romance.

So I enjoyed it. I learned a lot. But…it needed more there there.