REVIEW: Christmas with Her Boss by Marion Lennox

My other recommendation for this month is a Christmas book set in cold, snowy London so this is a nice balance set in warm, shirt sleeve weather Australia. It also features a rich CEO and a much-much-less-rich young woman who discover that no matter the temperature, love can be found amidst the hustle and bustle of the holiday season. 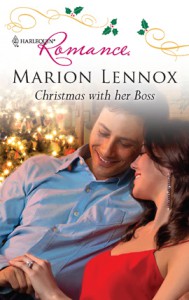 WS McMaster, who on the cover seems to be admiring the ring he eventually gives Meg more than Meg herself, is a rich-as-all-get-out head honcho for whom Meg has worked as a personal assistant for three years. She thinks she has the perfect job in that McMaster travels the world and she’s only on duty while he’s in country, which averages about 3 months out of the year, while she gets paid for the whole year. The rest of the time she can spend with her family on their dairy farm. Life is pretty good.

But then, in the final rush up til Christmas, she flubs up one time. But it’s a winner of a flub in that she fails to monitor the news one night and discovers the next morning that the Australian air traffic controllers have gone on strike, her boss has already checked out of his hotel and there are no flights out of the country and no hotel rooms left in Melbourne since everyone is stranded. What to do now?

The look of controlled frustration and disbelief on Mr. McMaster’s face tells Meg she’s probably lost her cush job so with nothing to lose, she does the only thing she can think of – invites him to come home to the dairy farm with her where they’re out in the country, with dial up internet access and no mobile phone reception. In other words, the fifth level of hell for a driven businessman like McMaster.

William McMaster can’t believe where he is and whom he’s with. He’s been raised to be in control and to separate himself from staff but there’s no way to do that on the farm. So, with stiff reserve, he manages to raise hackles and ruffle feathers while finally seeing the other side to this young woman he’s worked with for so many years. Can the holiday season, Meg and her family and 100 cows melt his icy control?

I like the fact that this book is clearly set in Australia. Let me elaborate. When I read a book set in a different country, I want to feel that that is where I am. I want local color, I want local language and I want local customs. I get them here. You also make sure that the book is focused on life out in the country. William is stunned at the lack of train service, the fact that his mobile phone doesn’t have reception, the reality of dial up internet and the fact that morning comes early to those who have to milk 100 cows twice a day. His world is turned upside down.

The usual imbalance of power in relationships between asshole heroes and dependent heroines that I sometimes find in certain Harlequin lines is less a factor in the Romance line and that proves true here. William might have bazillions of dollars and a global corporation under his control but here he’s the one following orders. And when he unwittingly offends Meg’s friends, she jumps him for it. I like a heroine who will speak up for herself. But I also like that as William slowly unbends, he doesn’t hesitate to offer his help where it’s clearly needed – both physical and financial. And his financial help isn’t just “let’s throw money to this family,” it’s finding the perfect gifts and ways to help without giving offense or being patronizing.

William and Meg are horrified when Meg’s family and friends begin to tease them about each other. Theirs has always been a work/boss-employee relationship and though they find each other attractive, they’ve never fantasized. As they see each other in a new light, some feelings start but are quickly reeled in – two steps forward then one step back – until love finally arrives. Kudos for making them think about the other person as a whole and not just engage in mindless, drooling lust and fantasies. When they do ultimately fall in such a short period of time, I can believe that it’s love and not just physical attraction.

The secondary characters are also well realized and serve to advance the plot and the relationship between William and Meg. Meg’s grandmother and brother and their neighbors could have been silly, yokel props or taken over the angst department but instead they serve as Meg’s anchor in life, the reason – along with the fact that it challenges her -that she likes her job with William.

Lots of Christmas books have a birth in them for obvious reasons. I adore the one you use and how it brings Meg and William that much closer. And when the young mother is bonding with her newborn while Meg and William are bonding with each other, I will admit to a happy smile. The proposal scene, complete with family and dogs and done under a spotlight of sorts, is a scream too. For a person as private as William has been shown to be, it says quite a lot about how much he loves Meg.

Never having lived south of or even close to the equator, I can’t imagine a hot Christmas but you make this one sound like such fun. It’s got a hero and heroine I’m happy to cheer on and in whom I believe. There’s a baby born on the day and I can even see William eventually trying to make dust angels once he’s mastered milking. B+

→ Jayne
Previous article: My First Sale by Phillipa Ashley
Next Post: REVIEW: The Russian Bear by C. B. Conwy