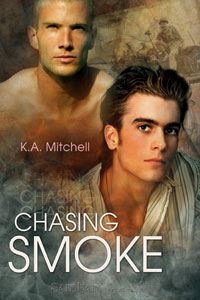 This book reads like what I imagine being inside a guy’s head must be like. Lots of stonewalling, lots of mixed motivations, lots of confused emotions. This ability you have to get emotions perfectly right and to show how they are so very wrong-headed is both the beauty and the problem with this book.

Daniel Gardner is back at his childhood home in Easton, PA for Christmas and then to supervise the final packing for his mother’s move to Harrisburg. The story opens with a break-in at his mother’s house on Christmas Eve. In the aftermath, he meets Detective Trey Erikkson, his teenage crush and first-fumblings compatriot. They haven’t met in 15 years since Trey ran away to bootcamp and there’s hard feelings between them, as well as the mystery that encompasses the break-in, Trey’s mother’s murder and father’s imprisonment for it, and later criminal shenanigans.

It’s the suspense plot that made the book less than brilliant. While I could get behind the conspiracy theory of the final revelation and I enjoyed the slow reveal of Daniel and Trey figuring out the mystery, the plot itself was Swiss cheese. Why would Daniel’s mother’s move spark the break-ins? Why wasn’t the culprit looking for the item he was looking for before the move? And, oh look! There just happened to be a letter stuck in a drawer of an otherwise completely empty desk! And, oh! it’s just what our heroes need for the case! Please. And, eventually, why, exactly, were Trey’s parents were killed? Considering this was the foundational act for entire book, the explanation lacked a little believability. There were explanations, don’t get me wrong, but the reasons were so flimsy, much suspension of disbelief was necessary.

And that’s a shame, because the book was wonderful, relationship-wise. As with Collision Course, the characters were so real. Frustratingly so, for most of the book. These were two guys, both of whom had trouble accessing and expressing their emotions, trying to work through more than 20 years of feelings between them, sorting out the good from the bad and the new from the old. You did an amazing job of integrating these layers. There were no intrusive info-dumps. All memories and old feelings were appropriate to the present-day situation in which they arose. I was never lost, except in that the characters themselves were lost.

And, as I said above, herein lies the genius and occasionally the downfall of the story. Both Daniel and Trey, in self-preservation and sheer bloody-mindedness, spend lots of time avoiding their emotions. Acting from emotional self-preservation, their motivations, both overt and unspoken, changed almost as often as they had sex (i.e.: a LOT), which made them incredibly realistic and maddeningly frustrating at times. I frequently marveled at your skill in building the incredibly convoluted inner lives of these men as I wanted to slap some sense into both of them.

As always with your writing, the story itself raised the emotional crises to which the characters responded, which is the way it’s supposed to be. That is, while both characters were dealing with the issues that the last 20 years of their relationship raised, the main emotional arc of the story came from their interaction with each other. None of the “I loved you as a teen, but you rejected me, so everything I do now is response to that decade-and-a-half old diss!” They worked through those issues as they worked through new issues that their modern day interaction raised.

I think this internal exchange Trey has shows everything I’m trying to say:

Trey let his head fall back against the corkboard with a deep thud, but it didn’t seem to restore his common sense. He still wanted to take Danny upstairs, into his bed, where they could try some of those things they’d missed out on fifteen years ago. When Trey had been too scared, scared of himself and scared of Danny to let it go that far. Trey had plenty of time off in the bank. He’d take a few days leave and they’d live on pizza and sex until the lube ran out.

And he didn’t care if Danny had a boyfriend waiting,* that in a few weeks Danny would be back in D.C. and Trey would still be here with his Post-Its and pictures and printouts. He just wanted. He hadn’t let himself want anything in so long he could actually feel it, like some animal rolling around in his guts, clawing a hole Trey had to find a way to fill before he bled to death.

He forced a memory of his father into his mind. “Promise.” It was one of the last coherent things his father had said to him, before the mini-strokes had eaten away the rest of his language skills. Trey didn’t have any business taking a week off to fuck his brains out. And then there was the realization of how much smaller his life would be when Danny left it again.

I said in my last review of your work that you have a gift for writing sex and that’s still true. I’d say at least a third of this book is sex, but I never got tired of it, I never rolled my eyes at yet another sex scene, because every single one advanced the emotional plot, every single one pulled me in and was damn hot, and every single one was different and fun. The book was worth reading for that alone–not that it’s pure stroke fiction, because it’s not. But it’s female stroke fiction: it’s just as much about the emotions as the sex. As it should be.

I adore your writing. And for what I read for–the emotions, the characters, two thick-headed men stumbling their way to love–this book delivered in spades (whatever that means). The romance of this book gets a solid and thoroughly enjoyed B and finally made me go out and buy the rest of your backlist (::sob:: not big enough!). The suspense plot, however, probably gets a C- and that’s generous. But as the romance is so much more important, both to me AND to the narrative, the novel as a whole gets a B-. And I look forward to your next book, whatever it might be.

*The boyfriend is dealt with beautifully, BTW. No cheating, I promise.

This book can be purchased in ebook format from Samhain beginning on June 9, 2009.