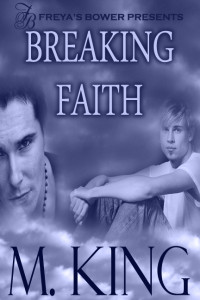 Although brilliantly written, with stunningly well-drawn characters, and a very compelling plot, this book was difficult to read. It wasn’t a happy-go-lucky, care-free, lift-you-up read. It was difficult and depressing. So while I couldn’t put it down, and I thought about it for days and weeks after I read it, I would find it very difficult to read again (which is why this review took me months–I had to read it again! So I read it during Drill for the National Guard :).

Brett Derwent has his life planned out. He’s going to make some money teaching skiing and working at a store in his hometown in Montana, and then he’s going to go to Washington for a pre-med degree, where he’s going to explore his sexuality in the freedom of a college campus far away from home. His happy, solidly middle-class life is thrown into wonderful disarray when he meets Tommy Hawks at the local ski shop. Tommy is the oldest son of an abusive father and a seriously codependent mother. Everything he does, he does to keep peace at home, or to take the worst of his father’s rages onto himself when he can’t. He is chained to and by his family in ways that are painful and inevitable, and he sees his time with Brett as freedom to be himself, freedom from his crushing responsibilities:

Brett, in fact the whole summer, had been the last gasp of his rebellion. One thing to call his own, to keep sacred. Tommy hadn’t gone looking for it and hadn’t expected it to last, or to be so important. You couldn’t put a river in a glass; all the dazzling water, the sound and the light and the whirling eddies…all parts of something else.

Their relationship builds slowly over a few months. You show them falling in love so gently, so delicately, that both of them are there before they really know it. Their love is real and solid, well-drawn and deep, and when they break up for self-sacrificing, slightly melodramatic, teenaged reasons, I was just as devastated as both characters.

And then the unthinkable happens. After a particularly awful night, Tommy’s father is killed. Brett instinctively gets involved in the aftermath by searching for and finding Tommy at their special private meeting place and then trying to take him over the border to Canada. They are, of course, stopped, and eventually, after confessions and lawyers and pre-trial motions and plea deals that are discussed exhaustively and, I think, realistically (Jane would have to tell me for sure), Tommy ends up in jail .

I love how realistically you draw Brett through all of this. He’s not all devotion and love. He’s furious at Tommy for leaving him. He feels terribly guilty that he didn’t push Tommy to tell him what was going on at home, perhaps forestalling disaster, although you show perfectly how inevitable it all was. Brett’s both desperately afraid for and blindingly angry at Tommy, but he sacrifices for Tommy, using his own money to hire a lawyer, switching from pre-med to physical therapy so he can stay close to Tommy to visit him. He’s both frustrated and comforted at the time as it passes inexorably. And all through it, his emotions are realistically dark and angry, even when he’s hopeful, even when he’s with Tommy:

He kicked half-heartedly at the shrubs below the deck. He couldn’t just have a damn good bitch about it and feel better, either. Too much, too many conflicting things roiled in him for that. Oh, he’d expected the anger, the inability to understand what Tommy had done-but the sense of betrayal, of loss and abandonment and, God, yes, even hatred, of all things! That had taken him by surprise.

One niggle: I don’t like how the question of whether Tommy knew what he had done was an issue for Brett. If Brett if going to support Tommy no matter what for doing something that was done in self-defense, does it really matter whether Tommy knew exactly what he was doing or not?

I also question whether a teenage boy would actually do this for his first lover, no matter how much he thought he loved him. Six years is a very long time when you’re nineteen, after all, and Brett’s commitment is admirable but maybe slightly unrealistic (says the woman who is married the boy she started dating at sixteen).

When Tommy gets parole and returns home, how much of their relationship is obligation and habit and gratitude and how much of it is real? You actually leave this question unanswered. Tommy and Brett seem still to be in the flush of reunion joy, even though several months have passed since Tommy’s parole at the end of the book. It’s begging for a sequel, which you’ve indicated to me that you’re writing. Although I adored Breaking Faith–your writing ability and the characterization of Brett and Tommy are both superlative–and although I can’t wait to read more of Brett and Tommy, I really hope that the sequel is slightly happier, slightly more optimistic. Although it more than rewards the effort, this is a difficult book to read.

This book can be purchased at Freya’s Bower in ebook format.