I will readily admit that the Harlequin Presents line is not one I usually read but somewhere in some past reviews here, posters had mentioned that the Presents Extra line is slightly different from the usual Pregnant Housekeeper, Asshole CEO. Whoever said that is correct but unfortunately that didn’t help me like this book for a number of reasons. 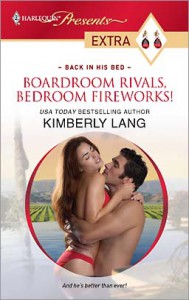 Brenna Walsh and Jack Garrett have a history. Young love hit hard, they got married, didn’t talk much but boy the sexing was mind blowing. Alas, that wasn’t enough and divorce followed. Now, ten years later, Jack’s father has left half of his boutique vineyard to Brenna and half to Jack. Neither is happy about that. Somehow they must either work together or figure out how to divvie up the goods. That is if love doesn’t hit hard again.

I keep a book reading log and usually jot down key points about a story to help me remember it and to kickstart a review. My notes for this book are as follows: “Fight, fight, fight, sex, fight, reconciliation, fight, fight, love? No.”

The book formatted to 255 pages on my Sony 505 and Jack and Brenna spend more time during the first 100 pages fighting than anything else. Then they continue to fight. Then comes some mind blowing sex then a lot more fighting. I got bored and frustrated in equal measures. These two didn’t talk their problems out ten years ago and guess what? They still aren’t. At least not until I was convinced that no matter how much they say they love each other, I still think a lot of it is just lust. And I don’t see how it would work a second time around any better than the first.

Brenna is so incredibly confrontational that she’ll work herself and Jack into an argument over whether grapes have to be crushed to make wine. If Jack said the sky is blue, Brenna would get mad at him and pick a fight after making it all about her. I’m not surprised the bank won’t give her a bigger line of credit and not just because her business is a risky vineyard. No, I see them turning her down because most of the time she came off to me as a sulky, belligerent child who wants the world exactly as she wants it and to hell with anyone else. Or maybe it’s just her way with Jack when he tries to calmly deal with the inheritance issue neither of them likes.

Jack, on the other hand, is a hero I end up feeling sorry for since he’s stuck with Spitfire Brenna who can and does ignite at the littlest thing and then takes her anger out on Jack. He may get bored with all his business flunkies making his life smooth and easy but I’d take that over a relationship with Brenna anyday.

So a heroine I don’t think has really changed much in ten years, a hero who just can’t stay away from her – much like a lemming with a cliff nearby and a couple who only seem to be in love because the words say they are equals a disappointing read. But at least the title is good! D