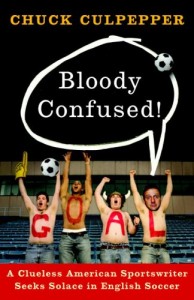 Yours was a book lingering in my Fictionwise wish list (love, love, love that feature) for a few weeks after the title caught my eye during one browsing session. I’ve grown used to hearing less than positive adjectives attached to the word “American” so wasn’t surprised to see ‘clueless’ added to the list. But the promise of wit and humor in the rest of the title caused my mouse finger to click. The description of the book brought up by said clicking made me wonder if this might finally be my light bulb moment.

What? WTF do I mean by that? Let me explain. I am one of the many Americans who just does_not_get the sport of soccer/football. I’ve tried. Each four years, when the World Cup takes over the planet and most of the population is consumed by it I vow to myself that this time I’ll watch an entire game. This year I’ll finally, finally!, understand just what it is about the sport that causes such devotion and fervor.

And each time I fail. Each time I’ll flip on the TV, I’ll watch fans in the stands going berserk, I’ll listen to announcers relating with breathless attention what’s going on. And I’m bored out of my mind. Usually within 10 minutes. A few times I’ve attempted to stick it out longer but after I realize my eyes are crossing and the screen is getting blurry as I sink into stupor, I toss in the towel. I don’t want to be one of the Ugly Americans stubbornly fixated on American football and basketball (baseball, which seems to consist of players spitting tobacco juice and scratching their balls, is also a snoozefest for me) but I am. I think my fellow reviewer Janine despairs of me but she’s too polite to say so.

And that’s what I mean by light bulb. That this will be The Moment when it all makes sense. When the light goes on, my eyes light up, a smile lights up my face and I rejoice that I can join with so many of my world citizens in appreciating the game. Did I find that nirvana? Alas no.

Instead, I did gain a slight understanding of football as it’s played in England and an in depth look at fans of the sport. Fans who will faithfully follow one team til they die, who travel hours across the country via train, taxi and bus to be segregated into certain parts of a stadium but who will loudly cheer and sing to their team. Even when they lose. Even when they’re relegated.

I loved the sections detailing how steadfast, loyal and true UK football fans are to their team. As the Newcastle men said, it’s not a choice. It appears to be born and bred into you. The possibility of sitting in a stadium, watching a sports event and listening to my fellow spectators singing songs to each other, the opposing fans, the players of both sides and the referees is fascinating and delightful. Reading your examples of their wit and inventiveness left me with sparkling eyes and a big grin.

But enough of the blue bear. Even cuteness gets cloying after a while. And enough of comparisons of how young and uncouth and unsauve America is compared to England. I know they’re great at many things and have history enough for 5 countries but we’re not chopped liver. Even if we do seem determined to use half the world allotment of petroleum products.

Since I know next to nothing about English football and its long held traditions and history, the use of American equivalents as examples to clue me in was a great help. I agree with your astonishment to not be able to purchase a ticket to a game which still has unsold seats left because one doesn’t have a buying history with that club. And how does one acquire a ticket buying history with clubs if one may not buy a ticket? And how do clubs keep track of this? The mind is staggered by the thought of how much manpower and computer bandwidth is occupied in this endeavor.

I agree with other reviews that state that this is not a book for long time footie fans unless they just want an American’s perspective on their game. They’ll already know what you’re just learning. They probably knew what you spent an entire season just starting to learn by the time they were 4. But for clueless Americans, it’s a harmless, easy way to ease yourself into an understanding of how the world’s most popular game is set up and played in the UK.

Since you explained so well and in such detail how you were bored with American sports or maybe just sports in America, I wonder how long your new found love of football will last. Will it equal the many years you spent as a sports commentator here? And how did you find year two of Pompey fandom? And if and when you ever decide you need yet another sports change to recharge your interest, what will be next? The World Wife Carrying Championships? Oh, and inquiring minds want one last burning question answered. Did you ever try a meat pie? B