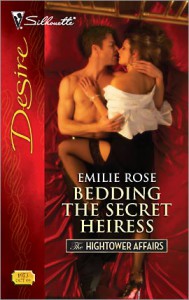 It was actually part of the excerpt for the next book in the “Hightower Affairs” series which got me to get this one as well. If possible, I like to start at the beginning and that seems to be with this memorably Harlequin-esque title “Bedding the Secret Heiress.”

Gage Faulkner is the enemy-‘her half brother’s spy. At least that’s what newly discovered Hightower heiress Lauren Lynch keeps telling herself. Despite the thrill this pilot feels at the rich, gorgeous businessman’s sudden interest, she knows what he’s really after: proving she’s a fortune hunter.

Gage’s mind tells him Lauren is hiding something. His body tells him he wants her anyway. And her body-well, it tells him the feeling is mutual. The Hightowers want him to prove she’s a gold digger, but the pain in her eyes is real. The truth is crucial, and he’ll do anything to uncover it-‘even seduce her.

I’ve had a lot of luck with the Desire line. It’s kind of “Presents Lite.” Filthy rich men who aren’t quite the assholes that are so common as in that line while the heroines seem to have more strength in their spines. Well, I got the heroine I wanted but the hero….

I like the fact that Lauren is a pilot and a self made woman who wants nothing to do with the family she never even knew she had. Her stray cat mother strayed quite a lot in her loveless marriage but Lauren feels no need to pretend to love this woman she didn’t know was her mother until Lauren’s eighteenth birthday. Lauren’s practical side appeals to me and I love that she’s determined not to let her half-siblings get to her. Half-brother Trent is a real piece of work and I hope Lauren makes him grovel through fire, manure and rotten garbage at some point real soon. I have a feeling she can and will.

Gage turns out to be the sand in my vaseline. Sure, he’s long time friends with Trent and doesn’t want to see anything bad happen to the Hightowers who were kind to him when he was a poor student. So I can excuse his initial boorish, highhanded treatment of Lauren. But his continued preemptory demands on her time – despite anything that she might be obligated to do for him as one of her brother’s clients – got to be too much. His interrogating questions were nothing short of rude and my temper would have snapped with him long before Lauren’s did. There’s helping a friend and there’s being a boor. Gage crossed the line early in the book for me.

But the thing that I find impossible to forgive in him is the point at which his opinion of Lauren changed. If he had shown an inkling of believing her and in her before he was presented with incontrovertible proof of her integrity, were I Lauren I could have eventually forgiven him – after I watched him grovel for a good, long time. But no, he had to see written proof of her innocence of all the nasty things Trent was accusing her of and only then did Gage start to eat humble pie. God forbid he should ever doubt Lauren on anything again. He might go beyond hateful comments and chilling demeanor.

This is a relatively short book and the focus stays fixed on Gage and Lauren for most of it. Though Lauren works well for me, I’m afraid Gage needed a wallop to the head. C

This book can be purchased at eHarlequin.com or in ebook format from Sony or other etailers.

This book was provided to the reviewer by either the author or publisher. The reviewer did not pay for this book but received it free. The Sony link is in conjunction with the sponsorship deal we made for the year of 2009. We do not earn an affiliate fee from Sony through the book link.