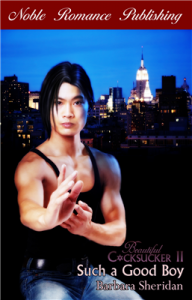 When I agreed to read the book, I had no idea it was #2 of the Beautiful C*cksucker series. I had no idea that BC *was* a series. I tend to agree with the outrage over the name (Paul Bens’ original reaction, Teddy Pig’s response, Karen Knows Best’s extensive discussion) but I also know that in BDSM play, some epithets that would otherwise be unacceptable (“cunt” comes to mind) are endearments during a scene. Which is not to say that they should be used as titles to the book/series. I will admit, though, that I deliberately avoided most of the debate and arguments because it was too huge and I’ve only got so much mental energy. But if the writing for BC#1 was anything like the writing for BC#2, we should all just have ignored it and let it slip into well-deserved obscurity.

I also had no idea how BC#2 connects with BC#1. And OMFG, doing the research, BC#2 is the second romance for the dom of BC#1 after his sub from BC#1 fucking DIES!! Holy Flying Spaghetti Monster, if I’d known that, I wouldn’t have read it. Don’t freaking kill off the main characters from a previous book! Cardinal Sin of Romance #1! Even if it is after 20 years of “happiness.”

Right. So. That aside…Mikisaburo Nabeshimi is a high-profile cop in Tokyo. He goes to New York to drop his son off at Columbia and meets Dave Kirkland, a brash young cop, when Miki meets a friend of his at the courthouse. Dave is the unofficial foster son of a Chinese woman killed by the man that Miki’s friend successfully defends against the murder charge. (Confused yet, dear readers? This is a novella. None of these stories are really resolved.) The story is the progression of Miki and Dave’s D/s relationship as they chase down Miki’s friend’s client and prove that he’s actually guilty of serial murder.

“I can sense what you need even if you can’t. Trust me”

What is also stupid and wrong is that Miki decides that he and Dave will go under cover to catch the killer. He informs Dave of this fact, then acts the same way with the undercover assignment as he does with the BDSM: never talks to Dave, never tells Dave his plans, keeps Dave guessing and on his toes and in the dark. Which is all very well for the sex (or not), but OMFG!stupid for a freaking undercover assignment that could get either or both of them KILLED! Metaphor for the relationship? I think so, but not in a good way.

There are story lines that go nowhere and coincidences that are just too much to believe (Dave’s best friend’s suicide?! The fact that Miki figures out the connection between the NY killing and killings in Japan in about a second?! Dave’s inherited apartment?!). All the incest imagery was strange and freaky and odd: Miki’s (platonic, lesbian) wife talking to Dave about their son gets Dave all hot and bothered, for example. Ick. And finally, Miki talks about his former lover (hero of BC#1, remember) as a friend and sometimes lover, but not as the love of his life: this is romance? How am I supposed to trust the HEA of this book if you’ve not only destroyed but called into question the very existence of the HEA of the previous book? All this AND the resolution of the suspense plot is confusing (I have no idea of who is doing what, where, and in what order) and anti-climactic.

So. Just no. Thank you for your generosity and I’m sorry I couldn’t like the book. But just no.

→ SarahF
Previous article: Can the locale of a book affect your interest in reading it?
Next Post: Friday Film Review: Say Anything