REVIEW: Be My Baby by Meg Benjamin 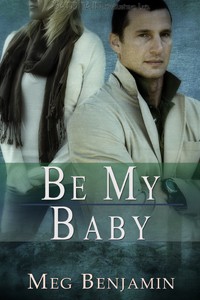 After I enjoyed the previous book in this series, “Wedding Bell Blues,” so much I was excited to see that the next book, about brother Lars, was available. From what went on in WBB, I knew that Lars’ bitch of an ex-wife, Sherice, would be there along with all the other crew characters: the other Toleffson brothers, their wives and sundry members of the small Texas town of Konigsburg. The question was, who would Lars’ heroine be and how would the love story play out.

Jessamyn “Jess” Carroll thinks she’s found a safe-haven for herself and her 9 month old son far away from her rich mother-in-law who is determined that the boy be raised with his Moreland kin, his rich kin, and not by the wife of the son whom Lydia Moreland despised. Lydia is willing to go to any lengths to get her grandson so Jess has fled halfway across the country and lives under the radar. But she steps into the world of the Toleffsons when she answers Lars’ ad for a baby-sitter for his 2 year old terror of a daughter, Daisy. The attraction between Jess and Lars is immediate but it doesn’t take long for Lars to see that everything isn’t as it seems with Jess. Now, can he do anything to help this haunted young woman? And better yet, how does he keep his matchmaking sisters-in-law from taking over the situation?

One really nice thing about this series is that I think new readers can jump in at any point. Yes, there are a lot of characters from the previous books to learn but I think you laid them and their relationships out logically here so it was easy to remember who is who. True, I did remember most of them from WBB but even so this book didn’t start with as much of an info dump and learning curve. As well, the characters haven’t done any 180 degree changes and mainly serve to further the relationship between Lars and Jess.

The humor of the characters adds a nice bounce to the story. Lars and Jess both add mental asides throughout the story which had me smiling and laughing. The dialogue, especially between the Toleffson brothers is great as are the scenes with the scary waitresses in the Dew Drop Inn.

The buildup of the plot involving Jess and the Morelands, and the reaction of the characters to the situation, seems realistic to me. No one immediately jumped on the OMG bandwagon yet at the same time, no one pooh poohed the possibility that Jess was telling the truth regarding what she was up against. I really liked seeing this from Pete the DA and Erik the policeman. And as the final showdown took place, brava for having those two have mini strokes at the short cuts that Lars the Warrior Accountant took to protect Jess and her baby. The fact that Jess feels fine about taking down her mother-in-law is also okay with me.

Thank you for not making baby Jack or Daisy be wittle angels. After all, we’re talking about a 9 month old and a 2 year old who are going to get singularly or collectively cranky at times. God help Lars when Daisy does start flashing her smile at boys for real. He will need to keep that baseball bat on hand. I did have one “oh, no you’re not” moment when Lars and Jess decide to spend the night doing the horizontal bed bounce after finding out that a villain is on the loose. True, I believed the reasoning that there probably, probably mind you, was no danger but still….

The means that the Toleffsons use to persuade, shall we say, the Morelands to better behavior sounds reasonable and more likely to take place than some major FBI investigation. I enjoyed seeing Erik be moved more into his brothers’ lives and would assume that a book with him as the hero is due next. I look forward to hearing his POV on his relationship with the other brothers. I did wonder at the speed with which Lars, who was repenting his hasty first marriage at leisure, dove into a marriage with Jess but I guess that’s twue lurve.

Anyway, it was nice to visit with the friendly folk in Konigsburg, TX again and I look forward to seeing Erik redeemed and, maybe, Wonder and Allie finally get hitched as well. B

This book can be purchased at Samhain in ebook format from Sony or other etailers.