REVIEW: Baby On Board by Lisa Ruff 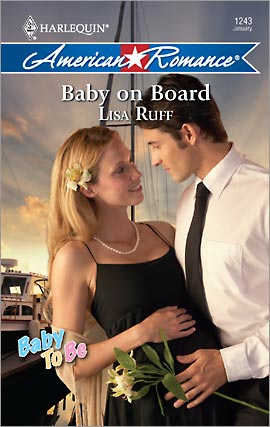 Books with babies or pregnant women in them usually make me gag. Especially with cutesy covers that Harlequin seems prone to use. However, since I did like your first book “Man of the Year,” and there was the added bonus of a sports themed plot, I decided to quash my qualms and give it a go. I’m so glad I did.

Kate Stevens and Patrick Berzani find they have instant chemistry when they meet. Two hot months later though, Patrick is off to another of his long distance ocean races. With only one phone call before the three months of the race, Kate wonders if he’s forgotten about her. And she has good reason to be concerned once she finds out she’s pregnant.

She wants the baby and there’s no financial trouble since she’s a successful glass artist but she wants her child to have a more involved father than she did while growing up. A man who’s gone for months at a time and is passionate about such a dangerous sport is not her first choice to depend on. She wants a stable, dependable man who is, above all, here and not in a race halfway around the world.

Patrick has been looking forward to taking up with Kate where they left off. He didn’t realize how much until he arrives back in Maryland. Where he learns some interesting news. He’s going to be a father. He’s all set to pop the cork on some champagne until what Kate is telling him sinks in. Now he’s got to prove himself worthy of being a father and not just a sperm donor.

From your bio, you obviously know boats and racers and it shows in the action sequences and boat stuff (yeah, technical terms are my specialty). I would also assume that you took the time to get the glass working scenes correct. I don’t know much about that but it seemed quite realistic to moi. You also use all this to good effect. It’s enough to round out the characters but doesn’t slow down the story with too much unneeded detail.

These two have some real conflict to work out. Kate’s right in that their baby deserves to have a father at home as much as possible and she has fears based on her childhood and the way her father was never in her life. Patrick loves the sea and racing. He says it’s his real home and I can believe it. Kate also has Patrick’s past history of not contacting her while he’s racing and his missed events after he finds out about the baby to back up her feelings that he won’t be there for her or the child.

All to often in romance books, one character (usually the heroine) has real reasons for wanting to put some distance into a relationship yet yields to one hot kiss then melts like butter on a hot stove. Which is why I found it great that Kate nails Patrick on the fact that he could have contacted her lots of times before his 3 month race began yet all she got was one short call. She realizes that during the race he certainly doesn’t have time to send her long love letters but before?, he should have made more effort. Good for her that she had the strength to resist the sexual pull when he first showed up in her studio. It wasn’t that she didn’t want to be with him, but that she had made the choice based on her past and his career and she stuck to her guns.

I also like that Patrick is at least trying to understand Kate’s fears and apprehensions about his lack of ability to be there for her and the baby. So yes, he does get a little pushy in his attempts to work his way into her life but he’s desperately trying to prove his case that he loves her, wants their child and wants to be a father. And the man is under some time constraints. But when he realizes that there’s more to the situation than just his racing behind her rejection of him as a father, he sits down and talks to her about her reasons.

I love, love, loved the scenes with Evan, Ian and Patrick. Not quite to the “let’s have a belching contest” stage but felt very guy in thoughts, deeds and words. Evan might not quite understand why Patrick wants to get involved in a marriage if the woman is willing to let him out of it, but once he knows that Patrick is serious, he does rally like a good friend and try to do his part to convince Kate. Ian is a little more emo in his efforts to fix things for his younger brother but it also shows how close the Berzani family is and how much they love Patrick.

Patrick’s “punch his truck” reaction makes sense given that he’s a guy under some heavy emotional strain. Men seem to do stupid physical things when they’re stressed and pissed at the same time. Some men might be happy that a woman he’s knocked up doesn’t want him in her life or having anything to do with the child but that wouldn’t make sense in Patrick’s case given his family and his love of his family.

I want Kate and Molly’s garden! I can just picture the riot of flowers and humid heat of a Chesapeake summer. I wondered how long Kate was going to drag things out with Steve. That relationship seemed to have all the makings of a well intentioned disaster.

I’m glad that Kate owned up to the fact that she never told Patrick about her fear of the water. And that he agreed that his impulsive attempt to take her sailing was well meant though poorly handled even if for no other reason than she’s pregnant.

Both end up doing a stupid thing: he makes the decision about stepping into race that killed his friend without telling her anything nor asking her opinion about it and she lies to him to get him to leave her. Kate comes to her senses first but, when faced with the chance of losing Kate and the baby, Patrick wises up and heads home. So, do two stupid things cancel each other out or add up?

What clinches the good grade is the fact that, all along, the relationship between these two is building on the emotions that are already there. Neither is ever totally out of the other’s thoughts nor do they want to be. So, despite the things that almost drove them apart at the end, I’m not blindsided by a “second to the last page” declaration of, “Oh, we’re suddenly so in love after a book of little but hate. Let’s get married!” And the epilogue reveals that each has given a little in an effort to compromise and find middle ground. B+ for this well done contemporary romance.