Anna Berzani moved halfway across the country to get away from her overprotective family. When old friend and notorious playboy Evan McKenzie shows up in San Francisco, Anna feels that same nothing-but-trouble attraction she’d felt at sixteen. A night on the town leads to a few kisses, which leads to…a nine-month countdown!

Practical Anna suggests marriage, but the gorgeous bachelor turns her down flat. He’s anything but good daddy material.

Evan always felt like an adopted member of the boisterous Berzani clan. Getting involved with Anna-‘irresistible as she is-‘won’t go over so well with his best friend, Anna’s brother. And when the rest of the family find out he refuses to marry her, he won’t just be disowned-‘he’ll be dismembered!

How can he marry her, though…when he knows marriage is nothing but heartache?

For a person who says she doesn’t like secret and or accidental baby books, here I’ve read two by you in the same series. Hmm, maybe I don’t dislike them as much as I thought I did or perhaps it’s just that I wanted to watch Evan McKenzie finally fall in love and stop teasing his best friends, Ian and Patrick, who’ve already fallen themselves. 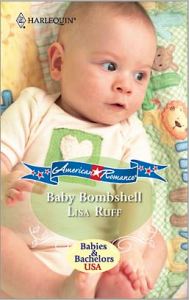 Is there a way to write a pregnancy book without having the heroine come up with all sorts of excuses to account for morning sickness? Though I admit that flying and being in emotional knots about seeing Evan, who hasn’t called her in the 3 weeks after *the night*, are better than usual. At least Anna never has any intention of not telling Evan about his impending fatherhood nor was she going to make demands on him. But boy, he sure failed to step up to the plate and not just once but several times. I kept thinking “chickenshit…” However, when Anna let fly at him for being such a chickenshit, she didn’t pull any punches and I cheered her on. I also like that she stands up to family pressure to name the father of her baby and finally gets her family to see things from her point of view.

Strange as it may seem though, I did like Evan’s stand on not marrying someone as a duty or merely because it was expected. He and Anna and the baby could have ended up miserably had he caved in to pressure. I also approve of Anna’s initial decision to turn down the half-hearted proposal he does make her for the same reasons. Both had to truly want to be married and it’s good that they waited.

Again, I love the interactions between Ian, Patrick and Evan. The talk, the actions and Ian’s quiet way of slipping in his point right between the ribs. And I love his point that Evan’s been waiting for Anna, dating other women as place holders, until he could get her and that 12 years of desire ought to say something about his true feelings for her. Then there are the little things he does for her – buying drawersful of tea, fresh fruit, urging her to nap – all subtle ways he does care for her and take care of her even before he’d admit the truth.

You brought this one down to the wire before giving Evan and Anna their HEA. At first I was thrilled that Evan is appalled at what had happened and then sure he doesn’t want to get married. But then I began to wonder if his change of heart would be too sudden just because you were running out of page space.

But Evan finally realizes that lying to everyone and not manning up to what the two of them had done is worse than coming out and admitting they’d screwed up when they screwed around. The Berzanis are the closest thing to real family, the kind who discipline you when you need it, that he’s got. The forgiveness they give him at the end shows what kind of family they are – one that is there for each other for better or for worse and since they had taken Evan in as one of their own years ago, it finally shows up in him. Kind of like the Grinch’s heart growing 3 sizes. B