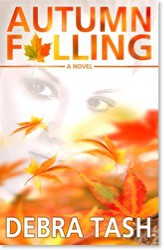 After reading and enjoying “Challenge the Wind,” I was excited when you offered your latest book, “Autumn Falling” for review. I wanted to see how you’d handle a contemporary setting and a first person POV from a slightly older heroine. And to find a contemporary using a small town in Vermont as the backdrop, rather than the usual large urban environment, is a plus. However, I’m afraid that as much as I enjoyed a lot of the book, the heroine did make me want to shake her at times.

“Novelist Cassandra Latham is determined to cling to her forties, that final hurrah before a woman slips over the abyss into fifty. But holding on isn't going to be easy, not with mourning her mother's recent death and trying to kick-start her literary career after a two-year spell of writer's block.

As Cassie edges toward the bottomless pit of mid-life angst, a journal written by her Revolutionary War ancestor may just help her connect the past to the present and make peace with her future. With a touch of humor, Cassie copes with monumental change-‘from her daughter and only child rushing into marriage to being uprooted from her ancestral Vermont home-‘to finally acknowledging that the invention of polyester stretch pants was a darn good idea after all.

Cassandra Latham strives to survive this pivotal passage, a time when autumn falls in every woman's life…”

The countryside of Vermont comes to life as the story progresses. It must be beautiful there with the autumn leaves changing color behind the old Latham house that’s stood for centuries. I could see why Cassie would be reluctant to leave for good everything she’s grown up with as well as the people who’ve populated her life – annoying as some of them can be. They’re home to her and become familiar to me as the story moves along. But they also seem like real people instead of caricatures which doesn’t seem like an easy thing to accomplish with a first person POV book.

The journal of Achilles Latham, Cassie’s ancestor, starts off with a bang. Here’s a man who truly is despicable – a falling down drunk only interesting in his next drink and a warm woman to bed. His journey to redeeming himself makes for interesting reading since he’s honest about himself and all his faults. A man further from hero material would be hard to find. But with their different histories with the men in their lives, I can see why Cassie and her mother would end up viewing him, and his actions, in such radically different ways. I do wish that I’d actually gotten to read the final bits of his journal as simply having Cassie give a round up fell flat after the early rollicking reading.

Cassie tells her story, and that of her changing family, with gentle humor that I found refreshing. She’s a woman I’d like to sit down and have coffee with and listen to her tell the story of her Revolutionary War ancestor. She sounds like she’d be a riot after her staple party menu of Rice Crispie Treats and a bottle of white wine. But she’s also not an easy woman to live with, especially at this time of monumental change in her life. Her mother’s death, her daughter’s impending marriage and her husband’s new job in Texas as well as her stuttering writing career and middle age are all taking a toll on her.

At times I got impatient with her procrastinating but I also understand where she’s coming from since I sometimes choose the “wait and see” method of dealing with change in my own life. But in the end, I kept coming back to the fact that Ivanovich has given up so much so that Cassie could live where she wants but now she’s basically telling him that she not sure whether or not she values autumn leaves over him. At the end of the book, I kind of get the impression that maybe now she’s ready to leave for Texas full time but the amount of time it took her to make up her mind about the man she says she’ll always love left a sour impression of her.

This is a book which literally seemed to fly by despite its length. It’s also one which I enjoyed spending time with and is filled with flawed characters, which I appreciated, whom I wanted to read more about. Though more women’s fiction than romance, I think readers will still appreciate Cassie and her Russian husband, Ivanvich, and how they work out the issues of a middle aged marriage. Thanks again for bringing the book to my attention.