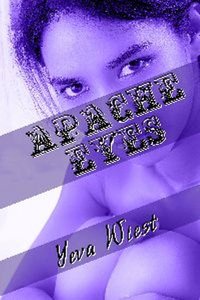 “Apache Eyes” is the second novella from you I’ve read. And it’s totally different from the first one. Not just because it’s a f/f historical but because it lacks the black humor that made “Practical Purposes” such a joy to read. But that’s okay, as it shows that you’re not just a one note author.

The novella starts strongly with intense descriptions that put me in the heart of the action. Jenny Barden is alone, in the heat of a blazing Arizona day, burying her slime of a husband who was killed during an Apache raid on the Barden homestead. Jenny, raised in the area, had been aware of the fact that an Apache band was watching the place and had hidden, thus escaping her husband’s fate. But she knows she’s still being watched and senses it’s a woman doing the watching.

Miakoda, daughter of Cochise, saves Jenny a second time by tending to her heatstroke before both yield to the intense attraction between them. But they have to overcome many barriers to their long-term future since there’s no love lost between the Apaches fighting to retain their homeland in the face of White aggression to wrest it from them.

“Apache Eyes” formatted to 103 pages on my ebook reader (Microsoft Lit 128 kb), so you don’t have a lot of space to work with in which to deal with the complexities of the plot. And thus, though I was disappointed that you resorted to a number of tried and true Romance cliches/stock characters, it’s understandable.

1) Jenny’s husband is a no good slime. He courted her for her homestead then treated her like dirt. Thus when we learn the Apaches tortured and killed him, he’s no great loss and no impediment to Jenny falling for one of his killers.

2) In most of the Native American historical romances I’ve ever tried to read, the white heroine (and I see Jenny as the heroine and Miakoda more as the hero) is treated badly by her own people and, after an initial getting-to-know-you period when she learns all about her new Indian people and maybe is tested by them, well by the Indians. Jenny’s lived a lot of her life in the Arizona Territory, seems to have always lived among white people and never even had any Indian acquaintances much less BFFs but within a few days, she’s batting for the other team. In fact, she makes it her goal to wreak havoc on an Army fort by allowing her new lover and Miakoda’s Apache band access.

3) Of course this isn’t supposed to bother the reader since you’ve painted most of the white people as mean, greedy, savage bastards and the Indians as pure defenders of their Homeland. I suspect the truth lies somewhere between these extremes but with the exception of one bad Injun and two nice white women, we see little of that.

5) Most of the men in the story are terrible. The one exception is the store owner who helped Jenny after the death of her husband. The rest? Cruel bastards. Yeah, I know this is a f/f story but not all men are Evil.

I also noticed some historical details that made me pause and consider whether or not they were correct. The army fort sounds like something out of a John Ford western movie. My impression is that most western army forts, and especially those in Arizona where there aren’t that many trees, didn’t have stockade walls so Jenny’s whole “sneak in the fort to open the gates” plan was unnecessary. Second, why would a General be in charge of a frontier fort? And why would you say a Colonel is his superior officer? Not in any army I’ve ever read about.

Fictionwise lists “Apache Eyes” as erotica instead of romance and I tend to agree with that. Most of the f/f scenes are hawt erotica. You make the effort to incorporate a HEA and show that Miakoda and Jenny genuinely love each other. Yet, since for most of the novella they can barely communicate vocally, by necessity it becomes a case of actions needing to speak louder than words. As I said in my other GLBT reviews, erotica generally doesn’t work as well for me as romance and since in this case you don’t supply Miakoda’s POV even to Jenny, it’s hard for me to see as much romance as erotica in the story. But the novella is clearly labeled as erotica so I’m not taking off points for this.

Finally, I wasn’t impressed with the deus ex machina aspect of the supernatural elements. Jenny can’t speak to Miakoda to convey some plot point? Just sprinkle magic dust on a fire and it’s better than a cell phone. Jenny is gravely injured? No worries since Miakoda is some kind of a moon witch and can call on magical snakes to heal her.

And thus, the book is going to get a D grade. It’s not because it’s a lesbian story or erotica, since it is clearly that way and I knew it going into the story, but mainly due to the cardboard secondary characters, historical details that I question and contrived magical stuff. I’m still interested in trying more f/f books but except for the romance aspect, I can’t recommend this one.

This book can be purchased at Books on Board (or other etailers).

→ Jayne
Previous article: The Good News Is DRM Free is Pirated at Lower Rate than DRM. Pirating Numbers Still High
Next Post: REVIEW: Magic to the Bone by Devon Monk