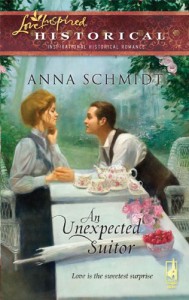 I am coming to look forward to your many novels set on the Massachusetts coastal islands. Plus you use the turn-of-the-century (turn of the last century I should say) era which is something I’d love to see more of.

Nola Burns initially appears to be an uptight, dried up spinster who’s as rigid as her corset while Harrison Starbuck has been known as a scamp and a carefree rogue since his boyhood. Nola’s hardworking, having taken over the care of her siblings at the death of their parents and since run the teahouse which was her childhood home. Harry is well off due to his instinct for a good business deal. Now they’re about to clash over Harry’s latest venture.

The beachfront teahouse is the perfect location for Harry’s planned luxury hotel to accompany the cabaret he’s building to entertain the locals and summer tourists upon whom they all depend. But it’s all Nola has and she’s not going to sell it or see her business ruined without a fight.

When Nola allows the actors to stay in her house in order to fill in for the summer staff she was unable to hire, the town busybodies’ tongues begin to wag. That wouldn’t bother strong willed Nola but the unsigned, threatening letters which have begun to appear finally start to take their toll on her. Can these two see a way for both to get what they want and how long will it take them to see in each other what the rest of the town already knows?

In many ways, “An Unexpected Suitor” reminds me of “The Music Man.” The time frame, the initially unbending heroine, the charming hero, the disapproving town elders and music thrown in to top it off. For while the town thinks well of Harry, they’re not so sure about the theater people he’s begun to associate with and whom he’s bringing to the island to stage his latest play-turned-operetta.

It reminds me of how restricted were the lives of most women of the time. There is Harry’s unmarried older aunt who’s finally “of an age” not to be bothered by gossip and speculation that she lives alone and the women of the theater, whom most respectable people have already consigned to sin, but poor Nola is still bound by the conventions of the day. I enjoyed watching first Nola’s, then everyone else’s, opinions of the theater people change. Even the minister confesses to his shame that he isn’t immune from preconceived notions. You remind all of us, regardless of creed, to step back and examine ourselves. But you do it without preaching which is something I admire.

The relationship between Nola and Harry takes time to develop. At first they appear not to know each other well at all which is something I found odd. They grew up in the same small town and in their youth, Nola seems to have had a crush on Harry but, when the book starts, it’s almost as if they’re strangers. However, I do like how you conveyed their growing interest in each other without resorting to mental lusting.

The pace of the story is more like the lazy days of summer and there are several subplots. While I enjoyed the story and the characters, I did get impatient at times. I felt a little tightening up would have moved the story along more quickly while not losing the substance of the novel. And while I admire Nola for not casting stones or making accusations before the identity of the letter writer is revealed, her stubborn determination to blow off the threats finally began to seem foolhardy.

Though this book doesn’t match my fondness for “Gift from the Sea,” it’s still one for which I think there is an audience. The setting and time period are ones I hope will be further explored even if I hope the pace is quickened, just slightly. B-

→ Jayne
Previous article: REVIEW: His Lordship’s Mistress by Joan Wolf
Next Post: Should I Buy an Ebook Reader This Year?