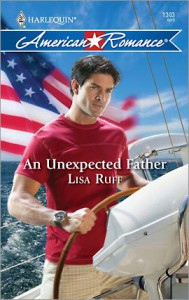 You have a way of getting me to read plots I normally wouldn’t be interested in. Secret babies in “Baby On Board” and now a troubled boy with an attitude in “An Unexpected Father.” But you haven’t let me down so I’ll keep reading…

“After a decade on the road, single mom Mimi Green gives up her rock star dreams and goes home to Crab Creek, Maryland. Her troubled son needs stability. Grandparents. A good school and friends his own age.

She’s not looking for a new father for Jack-‘but when she meets Ian Berzani she may need the handsome sailor for herself!

When Ian nabs a nine-year-old trespasser in the family boatyard, he thinks, miniature rebel without a clue. One look at the kid’s mother and Ian’s thoughts veer into dangerous, uncharted territory. Mimi was tempting him to stay.

The timing couldn’t be worse for a man three months, seven days and eleven hours from a lifelong dream of sailing around the world. He doesn’t want an instant family to change his plans, but how can he set sail and leave his heart behind?”

Ian Berzani didn’t strike me as father material when he first appeared in “BoB” but he turns out to have that special touch needed to help Jack find his place in yet another new spot. Their interactions are what I would expect – grudging acceptance, growing respect then friendship – from a man unused to children and a boy who’s never a father to teach him better. Yet you keep the story free of sentimental sap and “feel good” moments just for the heck of it.

I can practically feel Mimi’s frustration at not being able to help Jack fit in, or to get him to behave, but her love for and determination to get her son on the right track are apparent as well. Another thing I like about what you’ve done with her character is that she has an illegitimate son but no hang ups about that. She only feels guilty about having moved Jack so many times while pursuing her dream of singing but not about having him.

The romance, though, seems to move in fits and spurts. First it’s instant attraction which neither character wants to pursue so they push each other away, then suddenly they give into the lust and kiss but no that’s wrong so more pushing away then more giving into hot kissing, no we mustn’t because you’re going away on an around the world sailing trip but wow I want you so lets have sex. I also didn’t really see the need for Jack’s real father to make an appearance designed to spur Ian into jealousy. Yes, it does play into how Ian and Mimi resolve the conflict keeping them apart but it seems that could have been done a different way.

And speaking of conflict, I wondered how you would manage to work this one out. One thing I like about your books is that your not afraid to set up a good “this is going to take some effort to arrive at a happy ending” plot. A man who wants to spend 3-4 years sailing around the world and a woman who loves singing and has a 9 year old son isn’t a silly conflict. The way you solved it makes sense and gives everyone what he or she wants + twue lurve. Brava.

I enjoyed watching Jack settle down and get turned around, seeing the characters from the first book in “appropriate to this book” appearances, learning a bit more about sailing and, I think, getting an idea of who you might be writing about next. B