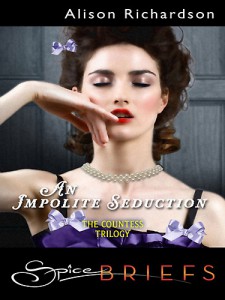 Recently I reviewed The Countess’s Client, the first Spice Brief in your Countess Trilogy. I enjoyed the story, and especially its haughty narrator, Anna, Countess von Esslin, a young widow with a taste for good sex on her own terms. To read more about her, I purchased An Impolite Seduction, the second story in the trilogy.

As An Impolite Seduction begins, three years have passed since Anna has last encountered the man who makes her heart, and other parts, go pitter patter. As she puts it:

I have had many men in my short life, and in every case but one, I have left them on cordial terms. The one exception, an execrable Scotsman I had known in Paris, was guilty of the basest treachery against me, and after we parted my one consolation was the knowledge that I could likely live out the rest of my life without ever having to set eyes on him again.

But Anna was too quick to console herself with James’ absence from her life. While visiting England to attend her cousin Charlotte’s wedding, Anna discovers that James is the neighbor of the man Charlotte is affianced to. Anna will be forced to spend much time in his odious, common, and oh-so-sexy, company.

And that is not the only problem afoot. It seems that Charlotte’s betrothed is a pious earl entirely lacking in sexual experience, and Charlotte herself is also a virgin. Anna is worried that her cousin’s wedding night will be disappointing at best.

What is a cosmopolitan countess to do but invite an Italian gentleman to seduce cousin Charlotte out of her pitiable inexperience, and maintain utmost decorum at dinner while a certain execrable Scotsman strokes her to orgasm beneath the table?

I had tremendous fun reading An Impolite Seduction. The sex was sexier here, in my opinion, than in The Countess’s Client, enhanced by Anna’s snobbery, which added to the sexual tension in paragraphs like this one:

Yet the right suit of clothes does not make a man a gentleman, and I was well aware that James was nothing more than the son of a common tradesman, whatever pretensions he might affect. Men from the lower orders have their uses, of course (and James, to be frank, fucked like a prize-winning Thoroughbred), but they should understand that they serve at our pleasure; they must not try to lead where it is their duty to follow.

Of course James does not understand this at all, and I loved the way the antagonism, and sparks, between Anna and James kicked into higher gear, as each of them attempted to rout the other.

I did wish that their relationship was developed a bit more outside the bedroom than it was, but this is erotica after all. Also, the story is written with a wink at the reader, leading us to understand that Anna doth protest too much; the narration sometimes indicates that Anna means yes when she says no. I mention this because it is something that some readers may object to, but while I understand why, I was able, for the most part, to view this story as a lighthearted romp.

Several moments had me guffawing; the blend of hilarity and sexual tension was highly entertaining. The last paragraph was priceless and I am now eager to read the final story in this trilogy, The Birthday Present. B+/A- for An Impolite Seduction.

This book can be purchased in ebook format at Sony and other ebook retailers.