Since I liked the first book of yours that I read so much, I’ve been meaning to try some more. “Always a Temp” is one that has been loaded on my Sony for a while and which I just now got back to. But while I liked it there are some issues I have with it. 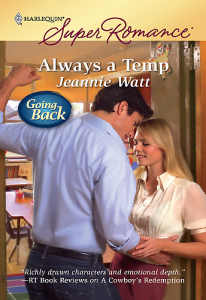 Callie McCarran knows now that she should have come back home to check up on her foster mother Grace but maybe Callie just didn’t want to think that Grace’s time might be limited. The cold shoulder Callie got at Grace’s funeral certainly tells Callie that most of the town thinks she should have made the effort too. But since Callie doesn’t plan on putting down any kind of roots, she doesn’t let it bother her…too much. But the fact that her high school flame Nathan Marcenek wants nothing to do with her does sting. She had hoped they might be at least friendly during her short stay in Nevada.

Nathan is in no mood to give Callie a second chance to hurt him. After she abruptly left town following their graduation, he tried to leave town too only to come back to recuperate after a devastating injury on the job as a reporter. But could they have a shot at a second chance if Callie can and will face what drives her to always pick up and go when it looks like she might settle down?

I like the small town atmosphere you create in your novels. They aren’t rah rah “small towns are so much better than the evil big cities” places but rather a world where there can be good and bad. Some people are friendly and neighborly while others are creeps. Some people will stick their noses in your business and others frankly don’t give a damn. This place could be right for certain people while others can’t wait to shake the dust off their shoes.

You create vivid characters even if all that we know about them are thumbnail sketches. Sometimes that’s all that’s needed to know about people if they’re not the main event in a book. I kind of expected to get more of Callie and Nathan’s childhood but that’s not the case. Okay, I’ll accept that they dated from high school and that Nathan expected more before Callie bolted. And from that I think it totally believable that Nathan would give her a cold reception when she appears 13 years later. But I found it odd that Callie never seemed to understand how much she hurt Nathan by her actions and that she was hurt when Nathan didn’t want to be casual friends with privileges while she’s in town for her planned short stay.

There is a lot of time spent on events outside of the main romance. Callie and Nathan are both writers and Nathan has been a news reporter so I can understand their interest in potential stories and their curiosity about the people and events around them. Yet while I found all this interesting, and probably a means to set up the future stories of Nathan’s two brothers, when I realized I was at the 2/3 mark of the book and the romance hadn’t heated up much yet, I did wonder if too much time was being diverted away from Callie and Nathan working out their future. If I hadn’t known this is a romance and thus I’m pretty much guaranteed a HEA I would have worried a tad.

But I do like that the book ends in a sort of open ended kind of way. There’s no wedding planned, no baby on the way, the main couple looks like they’re going to blow this small town for a bigger city and there are issues to be resolved about investigations in town and with Nathan’s brothers. I did enjoy my time spent reading the book and would continue with the series if there is one. So…maybe a C+ for this one.