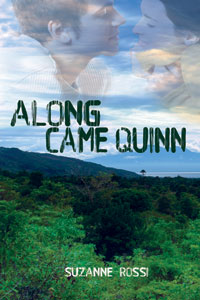 I’ll be honest and say that it’s the slight resemblance to the plot of “Romancing the Stone” which got me to look at then buy your book, “Along Came Quinn.” I’m a sucker for that film and for adventurous road romances. Danger, villains, treasure, jungle rot and watching a hero and heroine face the worst and come out on top and in love gets me every time.

Alex Montgomery has no idea that the man who breaks into her antique store looking for an ancient treasure map will be the love of her life. I guess it’s a good thing she didn’t kill him when she shot at him. And that she lied to the police about why she dialed 911 and that she bandaged his wound and called him a cab. Because soon they’re partners on a quest to track down the low down, dirty bastard who stole the real map and who, along with his cohort in crime, has a head start on them in tracking down the legendary treasure of the 5 Mayan Kings. Will Alex be able to keep up with Quinn Rafferty as they trek through the Guatemalan jungle? Can Quinn keep from strangling this woman who drives him nuts in more ways than one? And who will end up with the loot after the big show down?

Okay so in the end, this isn’t “Romancing the Stone” though there is a lot of jungle slogging, machete swinging and insects. And Alex manages to keep up with Quinn and their guides though she doesn’t completely refrain from complaining at times. But for her first time on an adventure like this, she does pretty well. And I like that she takes some serious revenge on the man who lied to her and used her to get the ancient map. Even Quinn is impressed with her job on Rod’s nuts. And I can see her point in not telling Quinn the whole truth about what she thinks will be at the end of the hunt.

Quinn is basically a decent guy who’s totally honest with Alex about leaving her behind behind if she can’t keep up with him. His reasons for going on the quest are also honorable but I do wonder if he thought about the fact that the Guatemalan government would want the lion’s share of anything that was discovered? However, he proves his cojones along the journey and seems like a man anyone would want covering their back in a tight situation.

I wondered how you would bring this “new adventure every year” man and this “settled in with a business” woman together in the end but by gosh you did it. I like the plan Alex comes up with to merge their lives and interests together and the way that they slowly change so that she’s a bit more adventurous while he’s a bit more willing to stay in one place for longer than 3 months.

After 3/4 of the book with only Alex or Quinn’s POV, which tended to jump back and forth within a chapter, it was a surprise to suddenly get inside Rod’s and Victoria’s heads. I also didn’t care for the pages of explanations and expositions as everyone fills everyone else in on what they did, what they plan to do and other and assorted things that in many cases a reader doesn’t need to know. I also didn’t buy that Victoria is going to have such a complete change of heart after a lifetime of crime.

But overall I found the book entertaining and a quick read. It’s a fun road romance with a twist on the treasure that I think is different yet believable. And it just goes to show that sometimes you can’t see what’s right under your nose. B-