REVIEW: All the Good Men by Cindy Jacks

It was the excerpt you supplied – authors please note this really helps us to decide if we’re going to take a chance on reading the review requests submitted to us – that swayed my decision to read your novel, “All the Good Men.” The title, while not as cringe worthy as some out there, is kind of bland but the excerpt which shows Dahlia and Jackson interacting and having fun being with each other made me say, “I’ll try this one.” 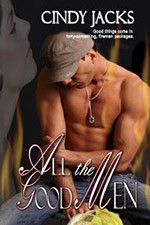 Dahlia Foster, named like her sisters for her mother’s love of flowers, sees her life gently floating by. Almost 40, she lives at home with her widowed father, runs the florist shop her mother used to own and is convinced that all the good men out there are either married or gay. Their new next door neighbor is hot but after he fishes her drunken father out of his koi pond, Dahlia figures that Jackson Carmichael doesn’t want anything to do with her in spite of how kind he is whenever they meet.

When her three younger sisters and best friend conspire to get her out dating again, Dahlia faces a month of blind dates of their choice but must also accept anyone who asks her out. When Jackson turns out to be the last one on the list, will he be able to convince her that she’s the one he wants?

I find I really enjoy your subtle style of humor. Low key and not, thank God, pratfall-ish, it kept me smiling and chuckling the whole time despite the fact that you tackle some serious subjects in the book. Indeed, this isn’t just a series of bad dates from hell that Dahlia must endure before she is rewarded with a Prince Charming. It’s a look at the dating scene facing older women, grief, shelved dreams, addiction and having the strength to reach out for what you want.

Dahlia has a nice, safe life but it’s not what she really wants. She’s fallen into the trap that a lot of us do when we let family obligations and a sense of duty – in her case looking after first her dying mother and then her grieving father – swirl us into the backwaters. The way she breaks loose isn’t so much a dramatic declaration of her freedom as it is realizing that a) she’s partly to blame and b) her growth as a person. If she hadn’t stretched herself, I would have questioned how long her relationship with Jackson would last.

Instead of turning the men Dahlia dates into buffoons or nightmares, you pull back and mainly just let them be not the right ones for her. I like the way she handles them with humor and good grace, well except for the second man who deserves her dressing down, but I do wish that the third man wasn’t turned into the stereotype of the gay best friend.

Two characters have to deal with addiction: one to alcohol and one to pain killers. Though this isn’t the main focus of the story, you treat the issue with dignity and show that even though friends and family may love an addict and try their best, it’s up to the person to deal with their problem and make the change to control it.

But of course the main issue of the book is how Dahlia and Jackson find each other and fall in love. I can see how Dahlia is hesitant to commit herself. Though she’s certainly dated in the past and has had a long term relationship, her family life has taken over her life and is something any man would have to be willing to deal with. Meanwhile Jackson thinks he’s found a nice woman but just has to break through the shell she’s built to protect herself from disappointment. I like that neither person is perfect, that they do have issues but that they can connect through shared laughter, quiet silences and time spent learning the other before finally committing.

Thanks for submitting your book for possible review. It’s a sweet story of two modern people falling in love that I found fast, refreshing and worthwhile. B