REVIEW: A Taste of Murder by Virginia Smith 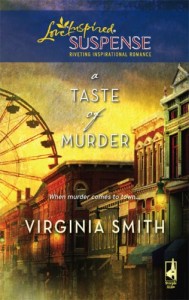 This is the first Love Inspired Suspense book I’ve tried. Frankly, I wasn’t certain how a Christian themed book crossed with deadly suspense was going to work. What I found is that it worked surprisingly well and is an area I’ll check monthly when the new Harlequin books are released.

The book is filled with large and small details and descriptions that give a great feel for the setting, namely a small town overtaken by a large yearly festival and a wedding. I knew the Southeast is known for pork barbecue and the Midwest for beef barbecue but honestly I had no idea Kentucky is known for mutton barbecue. I loved the telling touches like the thin towels at the aging hotel, the mud on the rear wheel well of Derrick’s truck and the fact that just about everybody has some trash on the floorboards of their vehicles.

What was Jazzy thinking to get herself roped into judging a kiddy beauty pageant? She must not have ever watched “Little Miss Sunshine.” I have to agree that makeup and high heels on young girls is ridiculous. Brava to Heidi for finally voicing her desires and sticking to her guns. Liz and I are of one mind since I also like children singly and preferably sleeping! Some of these girls need to do a better job with their answers during the question part of the competition.

"And another reason I want to be a doctor is because I think it would be good to go to places where the people are poor, like France. I’d like to go to France." The beribboned girl on the stage dimpled first at the three judges and then at the audience. Her smile wilted, and she stammered, "Uh, I mean like Africa. Or, or, uh, Kansas City."

Fighting hard to school her smile, Jazzy glanced into the audience in time to see a stern-faced woman in the second row give a slight nod of approval. The girl’s dimples returned, and she executed a Shirley Temple curtsy before parading back down the runway to the rear of the stage.

I think the people of France and Kansas City would be surprised to learn that they’re poor and in need of dire assistance!

I laughed out loud at the description of Kentucky burgoo.

Liz wrinkled her nose as she, too, pushed into the room. "What is burgoo?"

Jazzy grinned at her. "Your Oregon roots are showing. Every good Kentuckian knows what burgoo is."

"It’s sort of a stew," Caitlin explained. "It’s made with several different kinds of meat and vegetables and spices. People in Kentucky, especially in mountains and small towns like Waynesboro, are as proud of their secret burgoo recipes as Texans are of their chili recipes."

"I like chili." Liz tossed her suitcase on a bed. "What kind of meat’s in burgoo?"

Jazzy followed them inside, past the closed bathroom door. "Well, here’s what an old guy from eastern Kentucky told me when I asked that question." She affected a hillbilly drawl. "Hit’s got whatever roadkill we pick up ’at day. Coon. Squirrel. Possum burgoo makes good eatin’, long as it ain’t bin layin’ there more’n a day or two."

Liz’s mouth twisted. "That is disgusting."

Jazzy laughed and bumped Liz with her violin case. "I’m kidding, girl. Don’t be so gullible. It’s made from lamb, chicken and pork."

The book is a vindication for all the dog lovers out there. Old Sue proves her worth and maybe, one day, Jazzy won’t flinch when Sue licks her hand. I adore the classical pieces that the Jazzy’s trio played for the wedding, especially from Handel’s “Water Music Suite.” This is one of the first classical pieces I fell in love with. Derrick’s Aunt Myrtle has that right even if her relatives run in fear of her cane.

When it comes to the murder investigation, poor Sheriff Maguire gets a bad rep but he’s a competent man doing the best he can under difficult circumstances. He shows his professionalism by keeping his cool when the worst is happening and working the problem instead of making it worse. And he’d also rather keep his investigation local rather than calling in the State boys.

Jazzy and her friends aren’t cops or investigators so the story worked for me in that they don’t try to turn into pros and solve the case. Derrick would just as soon leave everything to the police and simply enjoy the festival, Jazzy’s company and the fact that he isn’t trapped in his mother’s house smelling nail polish and hair spray as his sister and her bridesmaids get ready for the ceremony. As many of their guesses are wrong as right and in the end, it’s common sense that saves the day. You tell us Jazzy is smart and we see that as she uses the technology at hand and her intelligence to contact help and point them in the right direction. We also know that she isn’t the type to collapse under stress which helps her in the end.

Jazzy is independent and doesn’t listen as much as she should to the voices of authority but at least she’s consistent in this and it is part of the character background you’ve given her instead of just being stubborn because the plot demands she do certain things. Derrick is protective but it’s because it’s been bred into him by his father and honed by taking care of his widowed mother and younger sister. He’s a great alpha hero in that he takes care of those weaker than himself, watches out for others, honors his commitments and has a subtle sense of humor such as when he tells Jazzy that his sister wants a memorable wedding but not because the accompanists hurl due to stage fright. She does do things that get her in trouble but she feels she has a legitimate reason, is in no danger because she is surrounded by tons of people or is close enough to call for help if needed. She doesn’t just wander out into a dark area, alone, knowing a murderer is waiting for her because she wants a breath of fresh air.

The narrative isn’t too “in your face” about characters’ Christian beliefs and since no one needed to be “saved,” I didn’t feel that I was being preached at. Just that characters were expressing their beliefs and living their lives in a quietly Christian way. This is not so much a whodunnit as an “it was done” like the film “Gosford Park.” There’s no POV from the killer. In fact, I don’t think there are PsOV from anyone but Jazzy and Derrick.

As I said, I was pleasantly surprised by this book. I had my doubts but ended up enjoying it a lot. Sharply drawn characters and setting lead to a story rich in detail and sense of place. It’s not preachy so I think that a wide variety of readers would like it. People who want more emphasis on solving the mystery might best look elsewhere but for me the book gets a strong B grade.