REVIEW: A Man in a Million by Jessica Bird 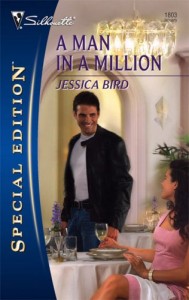 I was cruising the new Mills & Boon ebook offerings when I saw A Man in a Million in e-form. I’m not terribly familiar with your category backlist although I do have a few in my TBR pile that I haven’t yet read (they are in paper form and those tend to languish). In any event, I bought the ebook even though I hate Adobe DRM.

Madeline Maguire has all the trappings of a poor little rich girl. She owns nearly a third of a giant supermarket chain but has never taken an interest in the family business, mostly because of her sucky family. Instead, Mad took up sailing and became a world class sailor competing in events like America’s Cup. Despite her personal success, she is still very insecure on dry land.

Part of her insecurity is due to the constant degradation she received at the hands of her father and then her brother, who tried to gain the respect of their father by being a better and bigger asshole. Part of it is due to the comparisons she suffered with her sister who is so beautiful that she literally makes you catch your breath. Mad is tall and big boned and next to her sister she’s never felt attractive. Added to the physical comparisons is the fact that her sister makes it habit, maybe even an intentional mission, to sleep with anyone who is attached to Mad, including Mad’s fiance.

When Mad is just one of the guys, she feels right but put her in a society setting and she has no recognition of her own appeal.

Spike Moriarity, a gorgeous 6’4″ tattooed specimen of manhood, has eyes for no one else but Mad. Because of his past, though, he feels that he is not worthy of being with someone like Mad, someone so wealthy, so beautiful, and so good. Because of their personal insecurities, every word that is communicated to the other is immediately mis interpreted.

sean O’Banyon, the hero of Billionaire Next Door, plays fairygodmother and matchmaker of sorts. He forces Madeline to confront her brother because her trust terms are ending and she must take control of her part of the fortune now or else risk losing control to her brother forever. He also tells Mad that Spike is interested in her and informs Spike that Mad is interested in him. This absurdity is recognized in the book as one character says to the other “Are we in second grade.”

Much of the conflict is based on Big Misunderstandings, but given Mad and Spike’s positions, it is easy to see how even the simplest of communications are taken the wrong way. I was very intrigued by Mad’s sister who has some revelations of her own. While the dialogue isn’t full of one witty exchange after another, it’s very authentic.

The physical description of Spike as well as his characterization echo the male protagonists of your popular Black Dagger Brotherhood series to the point that I think he could have been lifted, wholesale, from this book, and inserted into BDB. Add fangs, stir, and you’ve got a member of the Brotherhood right here.

There’s some details that I thought were twisted to suit the story such as Spike is a celebrity chef and it’s hard to believe that his past wouldn’t be well known, particularly in New York even though his bailiwick is Upstate. I also thought that the last Big Mis was so obvious and expected in a book that had some intriguing twists. Still, I don’t regret having bought this book in the Adobe format although I’ll probably purchase it again when it comes available in some other, more portable format which I suppose is a recommendation in and of itself. You can really pack alot of emotion, agnst, and characterization in a small package. B

How to buy this book: it can be purchased via Mills & Boon store in Adobe format. I bought it even though I am not a UK resident. It can also be purchased in used form .

→ Jane
Previous article: Best of 2008 List: Reviewer Jan
Next Post: REVIEW: A Friend at Midnight by Caroline B Cooney