REVIEW: A Friend at Midnight by Caroline B Cooney 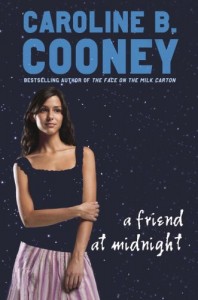 Your book got put in my Fictionwise Wish List a while back when I was suddenly overcome by the desire to check out Young Adult titles listed there. I was looking for something that wasn’t about cliques, or BFFs, or clothes or boyfriend problems.

Lily has settled into life in Connecticut after her parent’s divorce but it’s been harder on her eight-year-old brother Michael. After their mother remarries, her brother chooses to go live with his father in Washington, D.C., until the day he calls home from the Baltimore-Washington Airport where his father has abandoned him. Lily is home babysitting her baby stepbrother when she answers the phone. She has no idea the extent to which her faith in God will be tested. There is no choice for Lily. She will rescue Michael, but will she be able to rescue herself from the bitterness and anger she feels?

Yep, this description fit the bill. When Fictionwise offered their awesome filled micropay rebate, I loaded up on books including “A Friend at Midnight.”

When I decided to buy it, I completely missed the part of the blurb that makes the book sound much more like a teenage inspirational angst drama. Which is a good thing since that isn’t a good description of what’s here. Yes, there are scenes in church and Lily does have a fair amount of bitterness over what her no good, lousy, sh*t of a father did to her younger brother. But while in a way the whole aftermath is a test of faith for her, we the readers don’t get preached at or lectured to about it.

The relationship between Lily and her two younger brothers (full and step) is wonderful. Michael is the one devastated by his father’s rejection while Nathaniel shows the carefree innocence that only a two year old can manage to hang onto these days. Michael is forced to begin to grow up a lot sooner than he should have while Nathaniel views their one day adventure as a magical trip that he tries to get the grownups to believe he and Lily took.

Meanwhile, Lily is awed by the faith her brother shows that she’ll somehow get him out of the precarious mess his feckless father put him in and all the more determined to succeed because of it. After she pulls it off, she gives into Michael’s pleas to remain quiet since he doesn’t want the family and everyone to whom he bragged that he was going to live with his father to know what was said to him as his father basically pushed Michael out of his car. Eight year olds should never hear what was said to him.

And so Lily has to keep the truth bottled up – except for telling her best friend Amanda – and hope that Michael will return to being the daredevil eight year old he was before all this happened instead of remaining the quiet, mannered child who holds his hurt inside and somehow still longs for the father who doesn’t want him anymore.

Since the action is centered on the younger children of the family, their mother, stepfather and older college age sister are a little more like ciphers in comparison but that’s only because Lily, Michael and Nathaniel are so alive and vivid. Kells, their “dusty blue recliner kind of guy” stepfather is actually the one who notices much more than Lily would like. While older sister Reb – “please call me Rebecca now” – turns out to be the one who finally brings all the hurt and events of the past year out in the open.

What I really like about the book is that no one is perfect and, except for Dennis the asshole father, none are totally bad. I can understand why Michael still wants to spend time with the man who dropped him off at a major airport with no money or plane ticket. Nathaniel is a two year old who is subject to meltdowns when he’s tired. Reb, who knows nothing of what her father did, can’t understand why Lily loathes him. And Lily did such a good job covering her tracks and keeping mum that her mother doesn’t know to be furious with her ex, Dennis Rosetti, Scorpion Man.

The subtle humor kept me laughing throughout the story. Yes, the initial set up is exaggerated but once into the dynamics of the family, every thing felt more realistic. I sort of agree with their mother about Reb being ready to get married at nineteen but if she can’t wait until graduation, then Freddie – oh, what an awful last name – Crumb seems like a wonderful son-in-law.

I wasn’t sure what to expect when I started “A Friend at Midnight,” but what I got was wonderful. A-

This book can be purchased in paperback from Amazon or ebook format from the Sony Store.