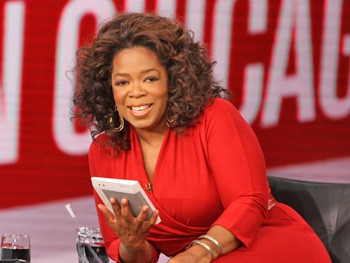 Oprah Winfrey has enormous consumer influence, particularly with the reading public. There is not an Oprah Book Club book that hasn’t enjoyed bestseller status for an extended period of time. A mere mention of a product on Oprah can “make” a retailer. So it was with no small sense of wonder that I received the news that Oprah would not only endorse the Kindle but devote a whole segment of her show to it.

Mike Cane has a blow by blow description of what went down (everyone in the audience got one and was allowed to download a free book – any book – during the show). Oprah also announced that an Oprah related coupon (OPRAHWINFREY) would be good for $50 off on the Kindle until November 1, 2008.

This is mostly good news for ebook readers as a whole and real coup for Amazon. It’s good for ebook readers because raised interest in ebooks will put pressure on publishers to make all of its books available in ebook format in a timely fashion. To date, St. Martin’s Press, Tor, and Dorchester have no or little ebook presence much to the great frustration to readers. In fact, there have been numerous complaints regarding Tor’s ebook giveaways whereby they gave away free ebooks but failed to make the sequels to those books available for purchase in ebook format. I’m completely frustrated with Simon & Schuster refusing to release its ebooks until a week after the paper release date. Note to S&S, this only delays a purchase. It does not force me to the store to buy the dead tree version.

On the downside of the Oprah-ification of the Kindle is that it feeds more power into the monopolistic interests of Amazon. Amazon has bought Mobipocket to create a new proprietary format for its ebook reading device, Kindle. It bought Booksurge, a POD printing company, and its pricing scheme punishes those publishers who do not use Booksurge. Publishers fear that a powerful Amazon will lead to Amazon dictating pricing schemes much like Apple was able to dictate the $.99 songs to the music industry. Making everyone buy the Kindle in order to read ebooks would be bad for the ebook industry in part because Amazon doesn’t really have any idea what makes a good ebook reader in terms of hardware design and because any diminished competition is bad for an industry.

Amazon seems to be following the iTunes/iPod model but iTunes/iPod allowed for a user to take her existing music library and convert it to use on the iPod. iTunes/iPod has also moved away from a proprietary format that can only be played on the iPod. This is because most digital music is sold without DRM meaning that a song bought at iTunes can be played on virtually any digital music player on the market. This is also true for songs sold at Amazon, Walmart and other online digital music vendors. Competition was, in large part, what led to the stripping of DRM from music because the iPod market share was so overwhelming (and still is) that the only way to sell digital music and make money from it was to sell it without DRM.

Amazon refuses to release its Kindle numbers. Some speculate that is because the Kindle sales are weak. In an anecdotal confirmation of that, one bestselling author shared with me that Kindle sales represented the 4th most sales. The breakdown was as follows:

Author friend did say that emails about her “not in ebook format books” came mostly from Kindle readers, so obviously Kindle interest and sales are growing.

I hope that publishers take heed from the evolving digital music market and recognize that a sole provider for ebooks is stifling for the market. Indeed, only by eliminating DRM and make ebooks cross platform compatible will the ebook really benefit from the Oprah push. An Amazon with monopolistic control over ebooks will be bad for the industry and bad for the readers.

Next week: My rebuttal to Joe Esposito’s post. Email me your thoughts on that topic via jane @ dearauthor.com.