Ode to the Sony Reader 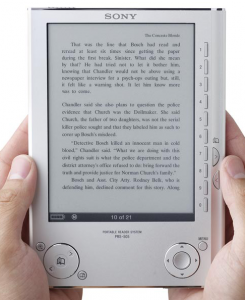 On the evening of January 15, 2009, I got my Sony reader, a silver PRS-505. It is a thing of beauty. The case looks sleek and classy. I think the red ones are very pretty too, but the silver is gorgeous and one of the reasons I wanted it is that bright colors can strain my eyes after a while. Yes, I’m the kind of person who decorates her apartment in restful shades of cream, beige and khaki, until my husband says “Can’t we get some color in here?”

And speaking of my husband, when he saw I had gotten my reader, the first words out of his mouth were “I guess you won’t be needing all these paper books, then?”

His second sentence was: “I’m jealous. You’ll love that thing more than you love me!”

I don’t quite love the reader more than I love him, but it’s a near thing. I think of a section from one of my favorite books, A.S. Byatt’s Possession, a little segment in a letter describing cucumber sandwiches:

oh, the perfect green circles — oh the delicate hint of salt — oh the fresh pale butter — oh, above all, the soft white crumbs and golden crust of the new bread

And just as Henry Randolph Ash sighs in writing to the woman he is falling in love with about the food that “the poetic imagination…pictures to itself as a form of English manna,” so I can sigh in writing about my Sony:

oh, the gleaming silver case — oh the cool, smooth feel of it in my hands — oh the e-ink display — oh, above all, those crisp black letters and the spaces that separate them into words

The letter-writers in Possession assert that “poems are worth all the cucumber sandwiches in the world.” But my new little gadget is more than a mere physical object. If the body is the temple of the soul, this Sony seems to me at this moment to be a shrine for the written word. It’s a veritable wellspring of poetry. For lo, by the morning of January 16th, I have loaded Shakespeare’s sonnets and the poems of T.S. Eliot onto my Sony.

I should make it clear that this is no small thing. I am a Luddite, a technophobe, a plank in the mud when it comes to anything electronic. When occasionally I learn something (such as the difference between a modem and a router) it often doesn’t stick with me…. and when it does stick, like my rudimentary html, it’s because, despite the fact that I find almost all things computer-related cumbersome, repetitive and demanding, those few little bits of technology give me a secret thrill.

So the fact that it took me no more than a few hours to charge my Sony, install eBook Library on my desktop computer, register my new reader, purchase eBooks from the Sony eBook Store, download them to eBook Library and from there transfer those to my reader shows that’s using the Sony is as easy as coconut cream pie.

Almost. I do have to agree with Jan about the Reader’s Quick Start Guide. Folding and unfolding the thing is annoying, and I too would have rather had a booklet with pages that you actually turn.

My husband, who is the technogeek in the house (whereas I am, to quote him the “word nerd”), tells me that we should get a power adapter so that I don’t have to hook the Sony up to the desktop to charge it.

He also says that there should be a safe way to disconnect the reader from the USB cable without turning the desktop computer off. But what that way is, I still haven’t figured out, and hubby, who has been called upon umpteen times to troubleshoot my desktop and my PDA for me, at this particular moment is not in the mood to act as my tech support (“It’s your device; you have to learn how to operate it.”) Oh, the joys of being a Luddite.

If the USB thing is a pain in the butt, spending $$ at the Sony eBook Store is a summer breeze. Once the Sony was hooked by USB to the desktop, and my credit card information entered at the Sony eBook Store, it was simply a matter of clicking on the item I wanted, then going to my shopping cart and confirming that I wanted to purchase it. The book downloaded to my eBook Library and from there, it was nothing to drag it over to the Sony Reader icon and load it on my reader. Since I’m a sucker for instant gratification, I can tell I’m going to have to be careful not to read myself into penury.

Reading on an e-ink display after squinting at computer screens large and small (I consider my Dell Axim PDA a computer, just a very small and limited one) is a joy. The letters are curved in all the right places.

I know that sounds pervy, but I have a thing for letters. Some people want to make love in a bank vault amidst millions of dollars. Me, I’d rather do it amidst thousands of magnetic poetry kit words (“I is still in love by you” my husband once spelled out with magnetic poetry on our fridge, when he couldn’t find an “am” or a “with.” Ingenuity is only one of the reasons I’m still with him). Language is the way to seduce me.

And so, though I am daunted by the idea of trying to figure out the difference between Calibre and “The Cabinet of Dr. Caligari,” I am determined to do so. Eventually. After I’ve had a chance to curl up with my Sony reader and enjoy the beauty of the written word.

“I am moved by fancies that are curled / Around these images, and cling” writes T.S. Eliot in his poem “Preludes.” So am I, Thomas Stearns. And they are that much more moving in e-ink.

Note: Sony is having a special Valentine’s Day Reader bundle in conjunction with Harlequin’s 60th Anniversary starting Jan 28th. We will have more details for you next week.

→ Janine
Previous article: Why ePublishing Needs to Grow Up
Next Post: REVIEW: What I Did For Love by Susan Elizabeth Phillips