Shannon Stacey pointed out a new epublisher launching on April Fool’s Day 2009. As the publisher came to defend herself in the comments, I assume that this is not some elaborate joke. 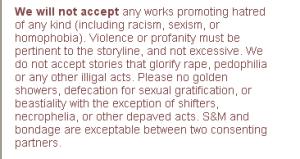 Given this blurb on the submissions page of Cherry Lane Press, my new metric for choosing epublishers is any publisher whose submission page contains three grammatical/spelling errors or less.   Anything less than three is acceptable otherwise, clearly, we are holding epublishers to too high a standard because, as the epublisher says in Stacey’s comments “Please keep in mind though that you can’t judge a book by its cover or a site by its typos.”

Of course not.   Why would readers or authors care about a publishing site having “typos”.   Is “exceptable” really a typo?   Look, if you, as an epublisher, really care about the business, don’t embarass the rest of the epublishers, eauthors, and ebook readers but putting this crap up.