I know that we have been harshing on you here and I thought maybe we haven’t given you a fair shake. Just because I was totally icked out by your erotica version of the 7 Brides for 7 Brothers concept (where instead of singing and dancing in the snow, the brothers are gang banging one bride after another), and Jayne was turned off by your MagiCK story, doesn’t mean that you aren’t a good writer, right? when I was knocking around Samhain Publishing the other day, I gave you another shot. Excuse me, chance. I really am going to have to choose my words carefully in this letter. 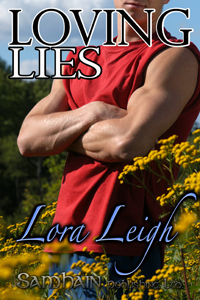 Oh, where to begin. The book opens with Jessie finally capitalizing on her heart’s desire, Slade. Since she was 16 she has wanted this man and she is fed up with him sleeping with every other woman but her. Slade has wanted Jessie since she was 16 but felt she was too young. His male urges are so strong for her, that in order to keep her pure, he sleeps with every woman in the county.

What the hell was wrong with him? He had never had a problem going after what he wanted, and damned if he didn’t want her. Hell, he needed her and he knew it. No one else could still the raging hunger riding him day and night as her birthday drew closer. God knew he had tried.

He’d spent a week the month before fucking his former F.B.I. partner Amy Jennings dry, night after night, and it still
hadn’t helped. He thought of Jessie. He dreamed of Jessie. Why the hell didn’t he just fuck her and get it over with?

Yes, this guy is a real prince. Why didn’t he just fuck her and get it over with? He finally does, and after taking her virginity in ALL ways, Jessie and Slade are a couple. They vow their love for each other and bliss ensues for one weekend. (I’ll never really understand why anal sex is de riguer in erotica but it’s like the carriage sex scene in regencies, all books in those genres must have them or else! Is there a “how to write erotica handbook”? ) Harsh reality sets in on Monday because Slade had been working on some undercover thingy dingy (he’s both an FBI agent and a Homeland Security agent) and now must pretend to be married to his partner (someone he shagged ferociously in order to protect Jessie until she was of an age to endure his massive sexuality), in order to take down some dangerous criminals. I never really understood why posing as a married man was so important but it was.

Slade goes to Jessie and breaks her heart in order for her to be able to move on and forget him rather than have her hope for a reconciliation. This was decent of him. He asks his two best friends and business partners to watch over her. And off he goes for FIVE years. When he returns, his wife has died and he wants Jessie back.

Now comes the really awful parts (as if the beginning wasn’t bad enough). During the time that Jessie and Slade were apart, his friend and business partner has sex with Jessie a few times – just to take the edge off. His reasoning? He was protecting her for Slade. And everyone from Slade to Jessie accepted this. Slade was content that it was Jazz having sex with Jessie rather than some other guy.

But wait, it gets worst. Slade slept with Amy, his wife, who he really hated and had a child with her. And not after a long time of waiting and pining for Jessie, but like days (the wedding night with Amy). That was really the kicker.   I didn’t see how this was romantic, sexy, or loving.

I hear you have fans, and rabid ones at that but this isn’t for me. F

→ Jane
Previous article: REVIEW: My Rebel Belle by Pamela Cummings
Next Post: REVIEW: The Dreamer’s Loom (aka The Dark One) by Michelle L Levigne