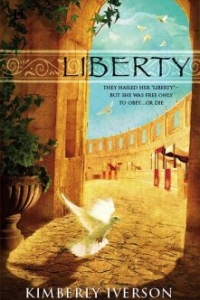 This turned out to be a lucky gamble book. And what made it even longer odds that I picked it up to try is that all I initially saw on the shelf at Waldenbooks was the spine. Let’s hear it for great cover/spine artwork. Yes, publishers, it really can sell your books. And for those interested, it’s also available as an ebook. And damn, it’s got a great UK cover as well.

After the wild Picts attacked her family’s farm near of Hadrian’s Wall, Rhyddes’s life quickly goes from being difficult to unbearable. Her father has always hated her but Rhyddes never thought he would take the opportunity of increased Roman taxes to get rid of her. She quickly finds herself sold as a slave, brutalized by the soldiers who deliver her to the slaver in Londinium then bought by Jamil, an Egyptian lanista who hopes that adding a female to his troop of gladiators will pay off his enormous investment in her.

Marcus Calpurnius Aquila doesn’t care that his career in the arena scandalizes his father, the Roman governor of Britannia. This is what he loves doing and Marcus knows he fights well enough that the risk of him dying there is slim. But when his father seeks to further his political ambitions by betrothing Marcus to the daughter of a powerful Roman senator, Marcus also knows he has no choice but to obey. Roman fathers hold the power of life or death over their children.

After agreeing to the betrothal and to stop actual gladiatorial matches, Marcus is allowed to continue sparring with Jamil’s gladiators and uses that to allow him to further his knowledge of this determined Celtic gladiatrix. Rhyddes is like no woman Marcus has ever known and he quickly finds himself losing his heart to her. But Rhyddes needs time to overcome her hatred of all things Roman before she begins to return his feelings. They both know their chance of a life together is nonexistent since Marcus is nobility and by becoming a gladiator Rhyddes has joined the ranks of the infamia, “the infamous ones” who are one step above common criminals. But when a conspiracy plot against the Emperor, Marcus Aurelius, is uncovered, both wonder if they will even survive at all.

I know from your author note that you took a few liberties with known historic facts to tell this story but you work everything so seamlessly into the book that it’s hard to tell. I was especially impressed by how you convey the meaning of things which were common place in this era but which modern readers might not know. It’s a hard balancing act and I applaud you.

I also like how you give depth to each character. Rhyddes isn’t just a red haired spitfire and Marcus is more than an arrogant Roman. You also do a great job painting a vivid image of Londinium and Rome, warts and all, but without making it too gross for modern readers. I did get a little tired of every male either falling in love with Rhyddes or wanting to shag her and Marcus might have been a bit too touchy feely but overall, this is a dynamic jump back in time. B+

Oh and in case readers want to know, you include the information about how to pronounce Rhyddes’ name: “hree-dthes.” I hate reading a book where I can’t mentally pronounce a character’s name. Thank you.