We enjoyed writing our joint review of K.A. Mitchell’s Life, Over Easy and, individually, both enjoyed your own Life After Joe so much that we thought we'd double the fun and repeat the experience. Driftwood shares some of the characteristics of your debut effort, Life After Joe. It features flawed, self-aware, and angst-ridden central and supporting characters; a rich, atmospheric context which engulfs the reader; beautiful writing which leavens the angst with a wry wit; and a plot centered on the sea and those who work and live in and around it. But Driftwood also diverges from your previous novel by focusing on characters who are either serving in or are veterans of the military, and by including a mystery subplot. 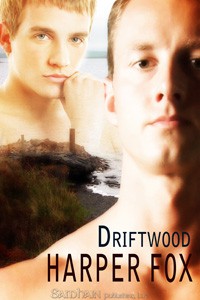 Thomas Penrose is a former army medic who served in Afghanistan and then returned to his native village in Cornwall to set up a practice as a GP. He lives in a derelict lighthouse/watch tower with his wolfhound, Belle, as his only companion. Thomas avoids everyone except his patients and tries to keep from drinking himself into oblivion on a regular basis. When he rescues a gorgeous young surfer, Flynn Summers, on the beach one day, he is drawn into contact with villagers and with servicemen at the nearby Royal Naval Air Service base, and he is enmeshed in a triangle with Flynn and Flynn's lover and former copilot, Rob Tremaine. Both Flynn and Thomas carry deep scars from their military experiences, and Flynn's bond with Rob is destructive and complex. The combination of the characters' military back stories, the abusive nature of Flynn and Rob's relationship, and the way the mystery unfolds ratchets up the angst level to such a high pitch that it is difficult for the reader to see how you will get them to an HFN, let alone an HEA. But the writing is so strong, and the evocation of the Cornish coast is so vivid, that it is difficult not to be swept along to the somewhat over the top resolution of the mystery and the absolutely over the top final pages.

Sunita: I loved Tom's voice and felt as if we really got inside his head. But the single POV, again, meant that Flynn was a lot harder for me to read. He's so beautiful and so screwed up, which the writing makes entirely believable and sucks me in, but in real life I think I would run far, far away. Nonetheless, I thought the way the relationship developed, and the way Tom tried to stay firm in his unwillingness to become part of a triangle, was effective.

I have no personal experience so I don't know how accurate this part was, but I thought the depictions of varied types of PTSD were excellent. I am so glad to see a sympathetic but unflinching description of what the lingering effects of war and conflict are. If anything, I thought some of the characters (like Victor) recovered a little too quickly.

Joan/Sarah F.: I don't have any experience with PTSD, either, thank heavens, but Thomas was brilliantly written, in all his fucked-up glory. I read this book because of the excerpt online. But especially this:

First, do no harm. Thomas, about to walk away, shivered to a halt. Eight bitter years since he had taken his Hippocratic oath, and he was certain he had violated it in a dozen ways. The war his nation was waging in the far-off desert he had left behind to come home and fit himself into the shape of the man he once had been-‘that formless, limitless, probably endless fucking war-‘it hadn't been conducive to good and dignified medical practice. Hippocrates probably had not foreseen the necessity of punching a wounded soldier unconscious to silence his raging objection to the failed Afghani suicide bomber being treated in the next bed. Of taking a rifle from a corpse and sniping off a bunch of gun-toting local kids across a wall of sandbags to defend the bleeding and helpless survivors at his feet. First, do no harm- It made Thomas want to laugh, or throw up, but he knew that to turn his back on the ocean now would be a harm his own fragmented soul might not survive.

I loved Flynn, too, because I could see him trying so hard to be normal, to make the expected gestures, and just repeatedly getting it wrong. I thought the slow reveal of his trauma and how it worked in with the mystery was very well done, no matter my issues with the mystery itself.

Sunita: I think the context is a character in and of itself. The depictions of Cornwall made me feel as if I were there, and the scenes on the ocean were really well done. To be able to move from the urban setting of the first novel to the rural village environment of the second without missing a beat is impressive. And the writing is once again top notch.

Joan/Sarah F.: I especially loved the watch tower that Tom lived in. I could feel Tom's relief when he was able to step over the threshold, but could also feel its desolation and emptiness that matched Tom's internal landscape so perfectly. I think the ending — after the mystery was wrapped up, the very last chapter — was perfectly done (and no spoilers here), precisely because of how it demonstrated the changed internal landscapes of both Tom and Flynn.

Sunita: I was less taken with the mystery subplot, and with Rob as a character, especially in the later parts of the book. He came across as too villainous. The prior connection between him and Tom which was eventually revealed was clever, but instead of providing a way to make Rob more complex, it didn't really go anywhere, and Rob wound up becoming more and more evil. And with the intensity of the mystery storyline, it was hard to come back to the HEA/HFN of the final pages. Given what has gone before, can we really believe that Tom and Flynn can settle into a relatively peaceful, angst-free life?

Joan/Sarah F.: It wasn't only Rob's character, but the over-the-topness of the mystery itself. Rob's crime was particularly heinous and his attempted cover-up with the hit-and-run on Tom was a little unbelievable, as was Tom's physical ability to do all that he did during the climax of the plot after being in a coma. I just kept thinking, “Okay, he needs to collapse now,” rather than focusing on the resolution of the mystery.

Sunita: Overall, the mystery and the angst were a bit too much for me. But I was so taken by the writing and the Cornish setting that I can see myself rereading this. And the sex scenes were really good; they were integrated into the story and they helped us understand the characters and their relationships. I will definitely read your next book.

Joan/Sarah F.: While the mystery and final suspense was a bit silly, to my mind, I adored the attendant angst, of course, as is my wont. I think the characters of both Tom and Flynn were wonderfully done and I loved seeing them both coming to life a little bit at a time through each other. Stay away from the grand gesture at the end and stick with the emotional introspection and your books would be perfect. For me. :P But I'm also very much looking forward to your next book (from Loose Id in November, apparently).