Is this the E Reader people have been waiting for? 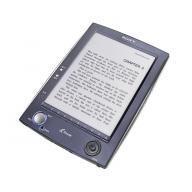 According to Mobile Read, the Sony Reader is ready for release. You could get it before the end of the month or at least by the beginning of the month. I’ll be at Borders in October to check it out.

One of the pics from Nathan shows a booklight attached. Cumbersome but usable. I am thinking that Ned would love one of these for reading manga which is currently unreadable (because of the smallness of size) on our IPAQs. I may just have to buy one to let you all know whether it is worthwhile. :)

I don’t know if anyone besides me noticed but this month Harper Collins released all of its romance books in ebook format except for Angel in a Red Dress. Go Harper Collins.