There are tons of great Android devices out there now, with more on the way. While many of these devices have the official Android Market on them from Google, quite a few (such as the new Kobo Vox) do not since they don’t meet Google’s Compatibility Requirements.  So what’s an owner of one of these devices to do?  Have no fear; there are quite a few options available. 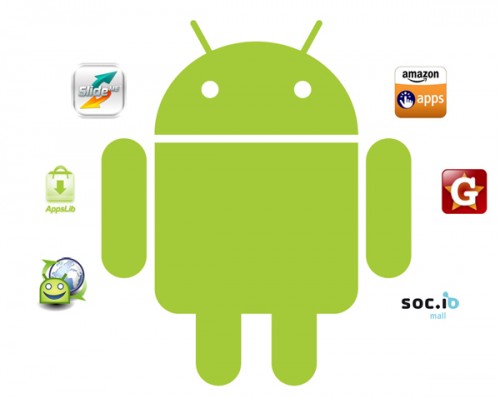 Many of the devices that don’t have the Android Market come with some type of third party market loaded on them, so a user has access to at least some apps, but what if you want something that’s not available through that third party?  I’ll try to answer that below. 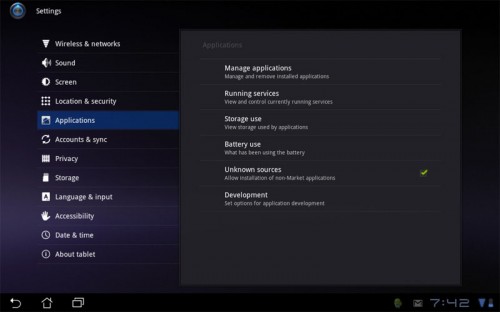 The first thing you must do is enable the loading of apps from unknown sources.  An unknown source is basically anything that’s not Google’s official marketplace.  To do this open your devices settings which is usually accessed by pressing the ‘menu’ button when on your home screen.  Once settings is open go to ‘Applications’ and you should see a check box followed by “Unknown Sources; Allow installation of Non-Market applications” or something to that effect.  Make sure that box is checked before going any further (you may get a warning message you have to OK).  Note that a regular unrooted/uncustom ROM’d NookColor will not allow you to do this and neither will some phones from AT&T.

Now that ‘Unknown Sources’ is enabled were all set to look at the various options for getting apps onto your devices, but before we get to those options it’s a good idea to understand some terminology.  Something you’ll hear mentioned time and again is an .apk file, which is the file type for Android apps.  An .apk can be thought of similarly to an .exe on a Windows computer or maybe a .dmg on a Mac.  It’s the file used to install the app to your device and operates in a similar fashion once you click/tap it to open it will launch the apps installer.

The first way to get apps would be to install one/all of the various third party markets out there.  There are quite a few of them and some do have a nice selection available.  Note some stores don’t work on all devices (ex: AppsLib would install on my phone [Galaxy S Epic 4G] and on my Transformer Tablet, but not run on either device).  These markets/appstores are in themselves installed to your device from an .apk and each website has instructions for installing (or see how to install an .apk further down in this post). Once an app store is installed you can browse and search that store and install apps by simply clicking ‘install’ from withing the appstore. Below is a list of links to some of the various third party appstores (followed by a list of some of the reading apps they have)…

The other way to install apps would be to ‘sideload’ them either via USB or downloading with your devices browser (you could also email yourself an .apk).  Many, many apps can be found posted to blogs and Android user forums by simply Googling the app name along with .apk, for example “Kindle .apk”.  I always check to see if the app developer has a website where the .apk can be downloaded first as I’m usually sure to get the most current version that way and don’t have to worry if it’s from a dubious source.  I also recommend you install Lookout Security & Antivirus to your device if possible before sideloading apps.

Once you’ve found the .apk you’re looking for you can download it to your computer and transfer it via USB or in many cases download it using your devices browser.  If loading via USB you’ll need a file manager (such as Astro) on your device so that you can browse to the .apk file and tap it and the apps installer will launch.  When downloading via browser you’ll be asked where to save it and when the download is done you’ll have the opportunity to ‘open’ it, this will launch the apps installer.  Tap install and the app will install to your device (see below).  Once the app is installed you can delete the .apk file you downloaded if you’d like, it’s no longer needed. 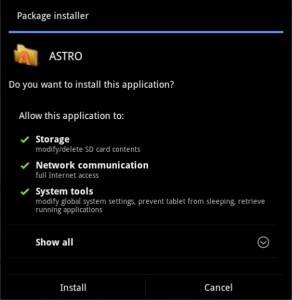 As you can see getting apps on your non-Marketplace enabled device is generally pretty straight forward.  In a perfect world everyone would have Marketplace access, until then at least we have these other methods.

→ Brian
Previous article: Agony & Ecstasy, the Anthology. An Introduction and a Giveaway
Next Post: Recommended Reads for November