How to Deal with the Breakup of Fictionwise and Overdrive 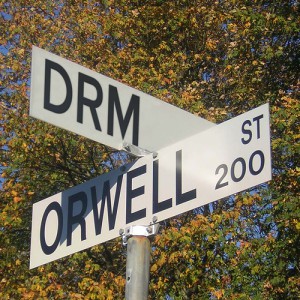 I don’t know if you could tell but I was totally panicked last week when I read about the Fictionwise break up with Overdrive. There are two major fulfillment sources for ebooks other than Fictionwise’s eReader: Overdrive and Lightning Source. These fulfillment companies take the raw text and design of an ebook and convert the text and graphics into an ebook. Overdrive provides fulfillment services for Microsoft, HarperCollins and Random House. It provides ebooks in the following formats: Adobe eBook (PDF and EPUB), Mobipocket (PRC), Microsoft Reader (LIT). Lightning Source provides Penguin and Simon & Schuster ebooks to the public in a variety of formats. Fictionwise owns eReader and fulfills the eReader format for readers.

Fictionwise would take a feed of offerings from Overdrive and provide those books to Fictionwise’s customers. When Overdrive decided to terminate its contract with Fictionwise it meant that any previous purchase of an Overdrive fulfilled book would no longer be available for re-download after January 30, 2009.

This is a big problem for readers. Everytime you buy a new computer, you have to authorize your reading software because of DRM or digital rights management. DRM is a software that publishers think that they should use to prevent piracy. Instead, as you can see by the Fictionwise example, it actually places purchases of readers in jeopardy because once purchased, an ebook with DRM is subject to being lost due to getting new hardware, new reading devices, or even suffering a computer malfunction.

In this case, because each different DRM version of an ebook is considered to be a new copy, Fictionwise had to contact each publisher and essentially ask permission to give a free copy of the book that was being removed from the customers’ bookshelf by Overdrive. Not every publisher has responded to Fictionwise yet but over 80% have agreed to allow Fictionwise to give each customer a replacement in eReader format.

I asked Fictionwise whether Overdrive’s absence would affect the number of new releases available through Fictionwise since in the last two weeks there have been a dearth of HarperCollins, Warner, and other publishers being released. I was told that Fictionwise is addressing its lack of new releases from NY publishers and we should see some immediate changes on Monday and in the forthcoming weeks.

Second, Fictionwise will continue to supply books in Mobi, MS Lit and haven’t been dependent on Overdrive for a while. It will also support Adobe but that is an issue that might take a few weeks to iron out. Fictionwise emphasized to me that it was going to support as many as format as possible.

I think Fictionwise could have done a better job of informing its customers about what was going on by emailing them or putting something on the front page, but it is trying to remedy this situation as best as technology and the law will allow them to do so.

For readers, I recommend taking time out of your day and download your books in your preferred format. Your replacement will be in ereader form and while that is widely read it’s not useable on every device out there. Make frequent backups of your ebooks. While the current federal law prohibits the stripping of DRM even for personal use, it’s the only way you can really ensure that the ebooks you buy are yours forever. Stripping the DRM is something that each reader will have to struggle with on a personal level. If you choose to do so, though, there are tools out there for many formats. More information can be found via googling.

DRM is the bane of the ebook world and it makes me sad to see this happen to Fictionwise, a store I have patronized for the last 4 years almost exclusively. I have to admit, it was a little entertaining to go through my 106 titles affected by the Overdrive/Fictionwise breakup and revisit my purchasing habits. For the record, Madeline Hunter’s ebooks were the first that I had purchased from Fictionwise.