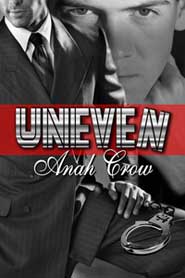 I found Crow’s Uneven because I’ve been procrastinating by flipping through Samhain, Torquere, Loose Id, and Ellora’s Cave, finding myself books with which I will "reward" myself when I get my current projects finished. Not buying the books, understand, but just finding them. Because of one quote in a review, I couldn’t stop myself from buying Uneven:

“Tell me what you want.” Gabriel got his hand in Rase’s hair again and pulled his head back so far that Rase’s neck hurt, his back starting to curve like a bow. Gabriel’s mouth ghosted over Rase’s, hovering there as though Gabriel were breathing in Rase’s rasping exhalations.

“Hurt me.” Rase’s eyes filled up with tears, wetness seeping out to chill his skin, when he heard his own words. “Oh, God, please. Gabriel, please, hurt me.”

Rase is that ultimate romance hero cliché: "a middle-aged captain of industy." He is the owner and CEO of Illian Industries. He’s in his forties with a trophy wife, an estranged son, a gorgeous house, and a life that is blown wide open when one of his stockboys, Gabriel Chariton, returning for a pair of handcuffs that Rase takes away from him, loses his temper and backhands him, splitting his lip. Rase has repressed for thirty years his homosexuality and his submissive and masochistic tendencies and Gabriel’s actions blow his control to smithereens, leaving him raw and bleeding and scared:

Life became nightmarish. Rase felt as though the careful sutures of his repression had split and the infection that he’d tried to contain for so long was seeping out faster than he could wipe it off his skin. He looked at himself in every reflective surface, searching for the signs that had given him away. Nothing but his own face, lined slightly here and there with age and sallow with anxiety, ever looked back at him. There were no answers. (10)

Another romance cliché that Crow makes beg for its mother is that the story is told entirely from Rase’s perspective, with Gabriel initially presented as completely emotionally unfathomable, dominant and apparently unfeeling, yet inexplicably soft and tender at times, confusing Rase, who has no experience with being taken care of. And yet Gabriel is as fully realized a character as Rase, as fully sympathetic and fascinating. The insights into his character are almost as heart-wrenching as the immersion in Rase’s thoughts, and watching Rase see himself through Gabe’s eyes is a feat of a master author and adds immeasurably to the relationship between the men:

“Do you know how perfect you are?” Gabriel twisted his hand in Rase’s hair and Rase’s eyes slipped half-shut as he moaned involuntarily. “Like that. I don’t even know you. I’m fucking nobody. And then you get down on your fucking knees and make me into the goddamn universe. Not because you can afford it, but because you can’t help it. Oh, Christ, Rase, that is so fucking hot. You made me want it, too.”

After their first almost anonymous sexual encounter, Rase slowly pulls his life back together with honesty, separating from his wife, reconciling with his son, coming to understand, if not accept, himself. Once he has begun this process, he looks for Gabriel again, only to find that he’s disappeared. Rase’s stereotypically fiercely loyal personal assistant (who reminded me very much of Jules Jones’ My Lord and Master, another series of novels that play with romance conventions) finds Gabriel in Florida. Rase follows him there and they feel their way slowly into a real relationship based on mutual trust and caring.

[Rase realizes,] Gabriel didn’t want to be Rase’s release from the pain of who he really was or the pressure of the life he was lucky enough to live. Gabriel wanted to be Gabriel, the person that he was who seemed to need to hurt and to dominate as badly as Rase needed to be hurt and dominated. Rase remembered the uncertainty in the man who had sat across from him at the bar, the pain of the man who had turned away from him at the poolside.

He didn’t want to be like all those people who had never seen that man. He didn’t want to be, he realized, like his father: a man who only wanted what he paid for and none of the consequences, none of the humanity, that went with it. More than he wanted to hide, Rase wanted Gabriel, wanted to know the person inside, wanted something real with someone, with whoever would want something real with him. (85-86)

The quibbles: Anah claims on her blog that she wrote Uneven in a few weeks. While you couldn’t tell that from the story, you can tell it from the copy-editing. There are a lot of dropped or extra words that can get distracting, which is a shame in such an engrossing book. And she seriously overuses the word "whine." While appropriate in places, especially for a BDSM romance, it does not have the best of connotations and is not something you really want your male heroes doing as often as they do. Finally, the loyal gay male secretary is just too much. While he’s a fun character, the stereotype isn’t questioned or subverted (as it is in Jules Jones’ novels) and there are too many echoes of the hotel manager in Pretty Woman or any other loyal, wise, "it’s for your own good, sir" servant, for comfort.

This book can be purchased in ebook format at Torquere Books.