Guest Post: What’s Hot in Romance? from All Romance eBooks

Jane kindly invited me to share a bit of what we at AllRomance.com learned about reader preferences in 2012. For those of you who aren’t familiar with All Romance (also known as ARe), we are a niche on-line bookstore that specializes in the sale of…. Yes, you’ve guessed it, Romance eBooks

This past fall we completed a survey of close to 6000 digital romance readers that dealt with the subjects of piracy, file sharing, and DRM stripping. So, I thought I’d hit some of the highlights based on our initial analysis of that as well as our 2012 sales experience in general

Most of the digital romance readers who took our survey reported being between 40 and 49 years of age. We’ve also seen a significant increase in our over-50 readers, who were responsible for 26.3% of our survey population. 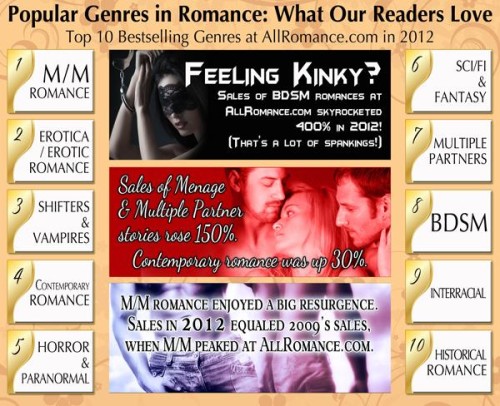 But approximately 19.3% of those respondents, or about 1% of the total survey population, don’t download books from those sites.

Our findings indicate that it’s the intent of most users who strip DRM to do it after purchasing.

Does DRM deter piracy? Since such a large number of those who strip don’t pirate AND almost all of those who pirate do strip, our conclusion is NO.

Has the lowering of the price point sparked a significant increase in unit sales and therefore a reader’s overall spending?.

Not according to our analysis. Although there are certainly exceptions to every rule, the 11.6% drop in price from 2010 to 2012 didn’t result in an overall increase. Rather, there has been a resulting 8% decline in terms of revenue and unit sales per purchase.

Since the number of potential new eBook customers is beginning to shrink and the number of books a reader can realistically purchase and consume are both relatively finite—publishers cannot continue to rely on burgeoning unit sales.

In the past year we’ve seen an increase in refund requests for short stories priced at $2.99 due to customer complaints around poor formatting, insufficient editing, and inadequate word count. Many of these books were in the 2000 – 5000 word length AND reported as such. We’re also getting more questions from readers about full-length novels that are priced at $2.99 or lower (excluding discounts and promotions) indicating they believe the quality to be suspect. In 2013 we believe publishers and self-publishing authors will begin to see significant backlash from undervaluing quality books and overvaluing short stories of poor-to-mediocre quality.

Does any of this data surprise you?