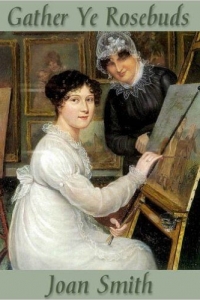 Gather Ye Rosebuds is kind of a Regency crossed with a mystery. It’s fun and interesting but maybe not as cuttingly humorous as some of your other Regency set trads I’ve read.

Zoie Barron lives a quiet life until after her uncle dies. While cleaning out his room to turn it into her new art studio, a diamond necklace is discovered. Fearing it is the one reported as stolen from her aristocratic neighbors, Zoie and her mother decide to return it on the sly. Unfortunately, Lord Weylin catches her at it and makes it his business to find out how the necklace relates to his now deceased aunt. Neither Zoie nor Weylin fullly trust each other as they unravel the mystery behind his aunt, her uncle, past secrets, and Zoie’s uppity butler, Steptoe. And maybe find some romance along the way.

You’ve written a relatively short but delightful story with no subplots to pad the page count and distract from the main plot. The descriptive characterizations immediately give me a detailed view of each person, Regency conventions are adhered to without a lot of fuss and the mystery kept me guessing for a while. While not as funny as some of your other books, there is still a lot of subtle humor.

The night was warm and balmy. Moonbeams cast a wan light on the garden, bleaching the pink and yellow roses to white, and turning the bushes a sinister black. As if to make up for stealing the garden’s color, night enhanced its perfume. The very attar of roses hung heavy on the air. On such a night did Romeo beguile his way to Juliet’s balcony.

My attention was diverted by the sound of hoofbeats from the park. A dark shadow appeared over a rise of ground. It advanced swiftly, revealing itself as Weylin, mounted on his black gelding, coming to me by moonlight. A lady would have to be withered and sere not to feel a frisson of anticipation at such a sight.

I went forward to meet him. He hopped down from his horse, wearing not a romantic smile but a scowl.

“I should have given myself longer than half an hour,” he said, breathing heavily. “I had the devil of a time getting away from Borsini. What must the clunch do but go to the stable, to say good night to that spavined jade of his.”

“There was no hurry,” I assured him.

He dropped onto a stone bench to recover his breath. I sat beside him and said, “The roses smell lovely, do they not?”

“I daresay. It is difficult to tell, with the scent of the stable–"and on my good jacket, too.” He actually lifted his arm and sniffed at his sleeve.

This effectively destroyed the romantic mood of moonlight and roses.

Overall, I give a B for this one.