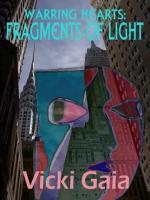 I love books set during WWII. There’s so much scope for drama, heartbreak, courage and bravery. Your book appealed to me because of the setting and the fact that from the blurb, the heroine looked like she is more in charge of her own sexuality than in most historicals and that it would make sense in the context of the story.

Resting in London after his tour of duty in France, Richard Hart is called upon to investigate a stolen Picasso that has surfaced in New York. With Leslie Havens by his side, Richard boards a steamer to New York and becomes embroiled in identifying art smugglers who are selling confiscated artworks on the black market. To his chagrin, his mother, Nanette (Hart) Bishop, is involved, and Claire’s old flame is one of the prime suspects.

I’m sad to say that although there were parts of the story I liked, there was a lot that didn’t work quite so well for me. From looking at your website, I know you’ve done a lot of research and there is a lot of period detail in the story. But the book seemed to me almost to be more mid to late 30s than during wartime. By the time of the story, we’re almost two years after Pearl Harbor but there is almost no mention of rationing or coupons books in NYC. Everything seems to be readily available, people appear to have no blackout worries, everyone’s up til all hours, travel back and forth across USA (to San Francisco) and to Europe also seems to not be a problem. There’s no worry about availability of canvas, paint, or other art supplies. And why aren’t those young American artists in military? Are they exempt? I wouldn’t expect the expatriot Europeans to be drafted but how is Paul not in service? Perhaps you explain that in the first book in the series, which I’ve obviously not read, but that question nagged me througout the story. Maybe I’m way off base and what you’ve written is perfectly correct. You do make it plain that wartime London is plagued with rationing and shortages but in NYC, everything just seems to be humming along as usual.

As for Richard and Claire, every time they are together they argue and fight about the same stuff. Rinse and repeat ad nauseum. Ditto with Richard and his mother Nanette: same old fights rehashed each time they meet. I got bored. I think even the characters got bored as you have several (Fran and Leslie, IIRC) both tell them all to stop talking and get on with it. I felt like saying, “amen people.”

So, what did I like? I do like that there isn’t a mass info dump at the beginning of book. You slowly spin out the characters’ pasts and their interactions. Even though there is a lot of history between and among these characters, I didn’t feel lost. Also, is this based on any real event? Were these countries worried about art theft or more that Nazis were profiting from it? I wish more time had been spent on this instead of Richard and Claire snipping at each other. Frank and Leslie’s relationship was very interesting. I liked the glimpse into the past about how homosexuals had to live. Claire is wonderfully free sexually and doesn’t get all angsted about it. Richard hates that she is but only because she uses it to hurt him and not because of any hang up about her not having a sacred hymen. What a relief.

I think I’d like to read the last installment of this trilogy just to find out how things end with these characters. And maybe the nitpicks I have with the book wouldn’t bother others. But I can’t really grade it higher than average.