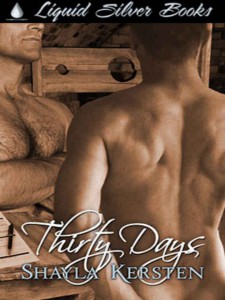 This whole review is italicized, bolded, and written in flashing red and yellow danger signs in my head, so imagine that as you read it. I’ll try to be restrained (harhar — very weak joke).

Biton set down his coffee cup and stood up. "He doesn’t understand that being a slave is a lifestyle choice. He’s never really known any other life. He thinks being tortured is normal." Biton paced the kitchen, anger at the people who did this to Cavan growing with each step. "He’s a gentle soul. I don’t think he’d be into submission if he hadn’t been forced into it."

"And you want to keep him around." It wasn’t a question and Harry hit the nail on the head.

Biton wanted Cavan, but the idea of giving up the thrill of control, of power over a helpless body, bound and gagged, waiting for his whim…The memory of Cavan strapped in the sling Friday made him shiver. "Yes."

How can someone write those three paragraphs together? Seriously? How can you say you don’t think he’d be into submission if he weren’t tortured into it when he was thirteen and then shiver at the memory of this same man strapped into a sex sling?! It made me nauseous, personally, and although Biton isn’t the man who enslaved Cavan, he’s coming pretty fucking close here, to my mind.

Somebody posted on Twitter (it might actually have been Jane) a few days after Roman Polanski was arrested that they’re sick of how the media says Polanski “had sex with a 13 year old girl”, rather than saying he “drugged and raped his 13 year old victim”. Don’t say “had sex with” when it was really “drugged and raped.” In this story, Biton and his friends continue to call Cavan’s abuser his “former master” and a “dom.” No, dammit. No. He’s a pedophile, a rapist, a torturer and, apparently, a murderer. Don’t continue to call him a “dom” when what he did was so hideous. Raping, torturing, and enslaving thirteen year olds is so far from being a BDSM dom that it’s not even funny. So unfunny I was crying with despair when I read this book. Aidn is a much sought-after dom who does not date his submissives. Huh? Why not? “He dated vanilla women, engaged in vanilla sex and kept the dominant side of himself just out of reach. It was simply something he did, something he’d done in the years since…” (ellipse in original). Ah. The old “past submissive ruined me for everyone else” trick. Right. Anyway, so Aidn meets Bailey at the mall, they recognize each other from the BDSM club they both frequent, and they go to her place to have sex, because they’re too hot for each other not to. He’s stripped her, has her sitting on her kitchen counter, orders her around a bit, and then cuts her panties off her. Big whoop-dee-doo. Without the constant internal refrain from both characters about their need to dominate or submit, none of this would be out of place in non-BDSM erotica. They do nothing — NOTHING — that vanilla people wouldn’t do when having sex. And then Bailey thinks:

She was slipping into a place that she’d only dreamed of. Subspace; the sensation of floating on air, a bliss so sweet it could be painful. She’d read about it, talked to others about it, but until Aidn, she hadn’t had an inkling of what it might be like to feel it. She gave herself up to it, gave herself and her pleasure over to him, and he was taking her there, making her fly. She was a different woman than she’d been just hours ago.

And, finally, submissive does not equal doormat. When a guy fucks you three ways to Sunday then leaves before you wake up, doesn’t contact you for two weeks, and then walks into your bakery, you do not just kiss him when he tells you to. You give him the cold shoulder, make him explain himself, scream at him for being an asshole. Not Bailey. No, sir, she kisses Aidn and calls him sir. Then when he runs AGAIN, she goes looking for him. Give me a break. Might as well write “WELCOME” from sternum to belly-button and lie down in the doorway. 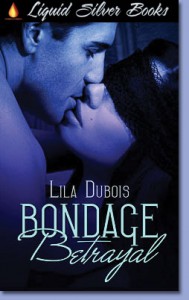 Bondage Betrayal by Lila DuBois (Liquid Silver Books)
This book makes the strong distinction between nice normal sane people who do a few kinky things now and then in the bedroom and those dirty rotten perverts who fully identify as kinky and try to live it all the time. I’m actually loathe to include this book in this list, because it’s got some really great writing, really hot scenes, and deep emotional issues. Then again, it’s also got a Big Mis that’s solved in three seconds and the characters are suddenly soulmates again.

That aside, then, Savannah in her normal life is an artist with a dark past, a deep betrayal in her background. She accepts a commission for a sculpture for a building only to see her dark past, the man who betrayed her, as she leaves the building. They meet again at a BDSM club that evening and most of the book is spent in flashback in alternating points of view that tells about the dark betrayal. Roman and Savannah were very much in love and exploring shaking things up in the bedroom a bit. They go to the house of a “Master” and go through a pretty intense but positive scene as Roman is coached by “Master Wilcox” and another guest. Wilcox then convinces Roman to let him “train” Savannah because she’s a “born submissive” and “needs” submission all the time and Roman can’t provide it because he’s too weak. Proving him right, Roman says yes rather than listening to his instincts. With smoke and mirrors and digital recorders, Wilcox then convinces both Savannah and Roman that they have abandoned each other, all the while raping and torturing Savannah. Savannah feels abandoned and betrayed (duh) and runs away, Roman feels abandoned and betrayed and runs away, everyone runs away until they come back together in the end with 20 seconds of “I’m sorry”, “no, I’m sorry”.

This book can be purchased from Liquid Silver. 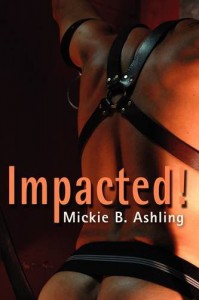 Scott is an oral surgeon (no, really — there’s a whole plot point about making sure his partner doesn’t do some delicate oral surgery because he doesn’t have the training. Sexay!) and a sexual submissive and masochist. He comes to work one day and finds that his new dental hygienist is the dominant he hooked up with for a one night stand a few weeks ago. Hijinks ensue, mostly having to do with their homophobic mutual boss. It’s one of those stories that thinks it’s a romance because there are apparent external barriers keeping the couple apart, but not really, and the characters fall in love and express that love so early that there’s no emotional tension or uncertainty at all. It’s boring. Seriously boring. Even with the ridiculous plot twist at the end of the book. The BDSM’s good, but the story as a whole is a cure for insomnia. Even though I struggled through in order to write the review, I’d have to say that this book was truly unreadable. Grade: F

Oh, and P.S.? No dom is going to pierce his sub’s left nipple. Left side flags dominant. Right side flags submissive. Do your research.

This book can be purchased at Amazon or in ebook format.