Four Things Barnes & Noble Could Do to Stay Competitive

The last financial report of Barnes & Noble was grim.  Nook Media LLC is bleeding money.  What was once viewed as the savior is quickly becoming a non producing goat. The tablets B&N produced are not catching fire and the cost to develop and keep apace with other technology giants was simply too much so B&N has jettisoned the production of any future Nook tablets but is keeping the e-ink tablets. Already some people are comparing B&N to Borders and suggesting in three years Barnes & Noble will have closed its doors.

Here’s my short list of items that I think Barnes & Noble could do to stay competitive.

1) Spend more time promoting self published work.  It does look like, with the launch of Nook Press (from PubIt!), that B&N is investing more dollars into creating a welcoming self publishing atmosphere.  I hear a lot of complaints about Nook Press but it’s interface is a lot nicer looking than that of Amazon’s. It allows you to edit a self published book directly from the dashboard, for example, something you can’t do at any of the other writing platforms offered by retailers.   The margins are high on self published work and the retailer has more bargaining power over self published authors than it does over publishers.

Their customer service, however, on the digital side needs help both for readers and authors in the Nook Press program.

2) Continue to convince publishers that their fortunes are tied with B&N.  One of the things that has stuck with me from Judge Cote’s decision affirming the publishers’ pricing-fixing settlements is her statement that the publishers should subsidize brick and mortar stores if their existence is so vital to the publishers’ survivals.  Penguin has started to do that with its in store kiosks.  Simon & Schuster’s refusal to come to terms with B&N is likely over the issue of what level of support B&N is demanding.

3) Start selling Nook books in store.  Barnes & Noble’s greatest advantage over Amazon is its retail existence but it isn’t using all of its space to sell the most number of books.  For example, B&N cannot stock every book in a series, but it can stock one or two and then offer the rest of the books in the series for an immediate download.  B&N has an app and it should have a UPC or QR Code reader that would allow a user to scan a code and immediately be presented with the options of downloading or having the physical book shipped for free to the customer’s house.

When you shop now at Barnes & Noble, you get a print out of five additional books that might be of interest to you based on your purchase but there’s no call to action, no ability to purchase immediately. They should have a code at the end of the print out that can, again, offer you immediate download or one click shipping to your house.

Those staff picks that change? They should have a hand out of those past staff picks with the ability for a customer to immediately purchase any previous title.  The goal here would be to bake Nook books and Barnesandnoble.com into every corner of the retail store so that Barnes & Noble is capturing every purchase possible.

I’ve frequently gone to B&N to look for a children’s book but unable to find it, I end up ordering it online from Amazon when I get home. But if B&N would facilitate an in store purchase and two day delivery before I even exited the children’s section, I’d get it from Barnes & Noble while the kidlet is still asking me for the title.

4) Offer high end household goods.  My B&N has a DVD and music section, still. I don’t see many people in it.  I think that space should be converted to either selling more books or offering high end case goods ala McNally’s Bookstore. Case goods have a huge margin (some say at least 50%, if not more).  Selling bookcases and desks are a natural fit as well as high end writing instruments, similar to what Levenger does.

Barnes & Noble has to make some changes. Wall Street is already looking at it nervously. 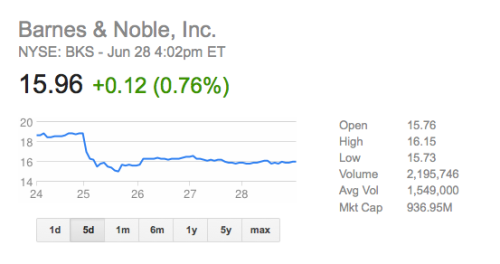 → Jane
Previous article: REVIEW: His Kind of Woman by Nona Raines
Next Post: REVIEW: The General and the Horse-Lord by Sarah Black