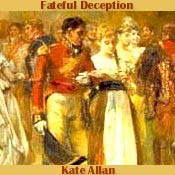 You manage to pack a great deal into your Regency novella, Fateful Deception. I’m grateful that the heroine, Lucinda Handscombe, is neither a silly twit nor a too modern young woman. You have her act as a reader might expect a sheltered young woman of the period to respond. The hero, Captain Robert Monceaux, is a gentleman and behaves as such. There is no “one night of love” for the heroine to remember in her spinsterhood and when she turns down Robert’s initial proposal, it’s not just because he doesn’t love her but for practical reasons which would have been of far greater importance in that time.

The villain was a rather stock character but his motivation was believable and far less grating than these “foaming at the mouth” types. But after all the trouble you take to set the atmosphere and get lots of things right, you throw in an enormous clunker of a historical mistake. There are also some editing and continuity problems (sentences that end in question marks when they shouldn’t and having Lucinda say “Good morning” to Robert at the beginning of a visit you’ve taken pains to set in the late afternoon) but these were more annoying than anything else.