There was that story running around the interwebs a while back that some guy had mashed up a bunch of Jane Austen stories and submitted them to publishing houses and agents to see if Jane Austen could still get published today. The big story was that the publishing folks were rejecting it because Jane Austen is just not saleable in today’s market. (I’d give links but I’m on dialup and it is just too painful to do the internet crawl on dialup).

Other folks suggested that maybe these editors and agents were rejecting it because they recognized that it was plagiarism or, at least, too close to the original.

Perhaps that is what Dreamspinner Press should have done with Lucia Logan’s book, A Hidden Passion. Of course, not they nor did any of the Eppie judges notice that A Hidden Passion was so close in form and language to Jane Eyre. The post which reveals the startling similarities is at Speak Its Name and is dated September 25, 2007. 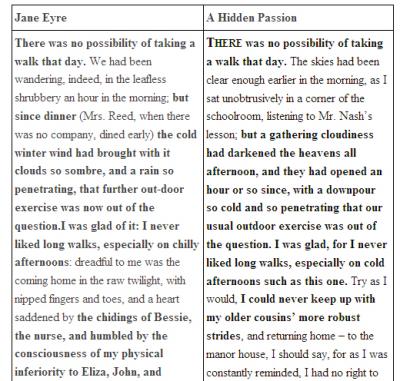 On October 5, 2007, Erastes published an email from Dreamspinner Press that the book had been withdrawn from the catalog with the author’s full support.

Despite this, the book showed up as one of the EPPIE finalists. Which goes to show that at least the ebook community can see the brilliance in the classics even if they don’t recognize that the ebook is not very original. Someone must have pointed them toward Erastes post and the finalist designation has been removed, but seriously, how does a book get withdrawn from the publishing catalog with the author’s full approval for possible plagiarism but not from EPPIE consideration? Just an oversight?

I’m guessing that since the author wrote in the foreward of the book that A Hidden Passion was an homage to Jane Eyre that the author didn’t have a very good understanding of what plagiarism was. I mean, that is the best interpretation that you can give it.