Despite my initial misgivings, I did go ahead and purchase a Sony Reader. I love the idea of the Sony Reader with its clear screen, sleek design and perfect size. I was disenchanted with its software program, both the Connect and the Reader’s own software. The lack of a good reader is holding some people back. We often hear of the complaint that readers don’t want to spend 3 hours a night looking at their computer monitor. I wouldn’t be an ebook fan if that is what it took to read an ebook either. However, despite advancements there is no IPOD for ITUNES. Frankly there is neither an IPOD or an ITUNES in the ebook market.

The one good thing about the Sony Reader’s release is that other manufacturers are realizing that there is money to be made in the ebook market. Here are some contenders for the best Reader of 2007. Of course, whether any of these materialize remains to be seen. 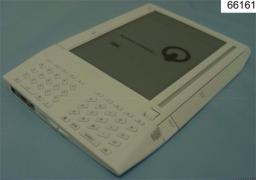 The Amazon Kindle. The rumors of the Kindle started surfacing around September of 2006 showcasing a really, really ugly case. In the spring of 2005, Amazon acquired French ebook software maker Mobipocket. Amazon currently sells ebooks only through the Mobipocket store thereby circumventing digital warehouser, Lightning Source. There are further rumors that the Kindle will be low priced, maybe around $50 with some kind of tying agreement similar to cell phones or a subscription based service. The Kindle features an e ink 6-inch 800 x 600 display, with 256 MB of internal storage, a SD slot, keyboard with cursor bar and scroll wheel. The FCC documents also show a standard mini USB port and a 3.5 mm headphone jack.

STAReBook is a Linux-based ebook reader from Taiwan. It supports only its proprietary format but is supposed to includes a windows pc based application to convert your own text, doc, html, and pdf into the STAReBook format (STK). This has not been verified. It also claims to play audio files in the mp3 format. There is 64MB of user file storage with a SD/MMC slot supportable up to 1 GB.

Before Jim Baen passed, he charged the Baen Bar with developing an ereader that would meet the needs of the Baen readership. The Baen Bar intends to deliver on that charge sometime in 2007. The ebook reader will run the FBReader software and be able to read all the formats that Baen offers. It will feature some amount of text searching but does not include a touchscreen or keyboard, both of which would increase the price point a great deal. Currently, the Baen Bar is looking at e ink devices offered by Bookeen but also displays by Kent which are cholesteric LCDs. The cholesteric LCD screens have a higher degree of visibility in the sunlight than ordinary LCDs and are, of course, backlit, allowing nighttime reading without an additional lightsource.

The Baen Reader would be available to any purchaser. The purchase would be made through paypal and currently has a price point slightly below the Sony Reader. This is definitely one to watch.

Bookeen. Bookeen is another who has the right idea for ebook readers. It offered the Cybook which had the ability to read html, rtf, docs, pdbs natively (without conversion). The Cybook came preloaded! with my favorite ereading program: Gowerpoint’s  µbook. It also had the ability to read secure Mobipocket books. I think Bookeen understands the need for a device to read multiple formats. If the Cybook came with an eink screen and the price point was close the Sony Reader, it’s one I could recommend without hesitation because I think that screen size and readability even without the built in backlight would be awesome. The drawback is the E Ink device offered by Bookeen is not for sale individually but can be bought in units of 200. Mobile Read is trying to gather up enough readers to make a group purchase.

Panasonic Words Gear is probably the nicest color ebook reader on the market. It has a 1024×600 resolution 5.6 inch full color panel display. It has about 6 hour battery life and not only allows you to read books but also is capable of displaying video and photographs and playing music.
Another unique feature is the ability of the Words Gear reader to orient its content to whichever way is up, allowing both right handed and left handed users the same ease of use. It is unknown whether this product will be for sale in the US.

The 2007 Consumer Electronics Show happens in January so who knows what will show up there and knock our reading glasses off.