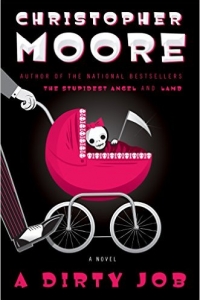 A few things I know for sure when I start one of your books: it’ll be different, it’ll be funny, and somebody will die. In the case of this book, lots of people will die but then when the main character is a Death Merchant, it kind of goes with the territory.

I feel “Dirty Job” is a cross between the film “Jack and Sarah” and the short lived cable show “Dead Like Me.” Charlie is left to raise his daughter alone after his wife’s sudden death following the delivery and it’s at the moment of her death that he joins the others in San Francisco whose job it is to retrieve the object containing the soul of each dying person. No soul retrieval equals horrific Underworld upheaval. Like George, the teenage soul releaser who didn’t understand her job and didn’t initially want to do it, Charlie is left to flounder around until he finally gets his hands on “The Great Big Book of Death” (“The cover was shiny, like a children's picture book, with a colorful illustration of a grinning skeleton with tiny people impaled on his fingertips, and all of them appeared to be having the time of their lives, as if they were enjoying a carnival ride that just happened to involve having a gaping hole being punched through the chest. It was festive–"lots of flowers and candy in primary colors, done in the style of Mexican folk art. The Great Big Book of Death, was the title, spelled out across the top of the cover in cheerful, human femur font letters”) which is supposed to tell him about his job and how to do it yet which ultimately reveals little to Charlie. And like Jack, Charlie initially grieves wholeheartedly for his dead wife and spends way too many years with only his infant daughter and relatives to keep him sane.

I love the Beta Male analogies and descriptions,

Charlie's problem was that the trailing edge of his Beta Male imagination was digging at him like bamboo splinters under the fingernails. While Alpha Males are often gifted with superior physical attributes–"size, strength, speed, good looks–"selected by evolution over the eons by the strongest surviving and, essentially, getting all the girls, the Beta Male gene has survived not by meeting and overcoming adversity, but by anticipating and avoiding it. That is, when the Alpha Males were out charging after mastodons, the Beta Males could imagine in advance that attacking what was essentially an angry, woolly bulldozer with a pointy stick might be a losing proposition, so they hung back at camp to console the grieving widows. When Alpha Males set out to conquer neighboring tribes, to count coups and take heads, Beta Males could see in advance that in the event of a victory, the influx of female slaves was going to leave a surplus of mateless women cast out for younger trophy models, with nothing to do but salt down the heads and file the uncounted coups, and some would find solace in the arms of any Beta Male smart enough to survive. In the case of defeat, well, there was that widows thing again. The Beta Male is seldom the strongest or the fastest, but because he can anticipate danger, he far outnumbers his Alpha Male competition. The world is led by Alpha Males, but the machinery of the world turns on the bearings of the Beta Male.

and the fact that we get to see the Emperor of San Francisco and the troops again as well as a short cameo of Jodie, the vampire. The Morrigan, or Sewer Harpies as Charlie calls the trio of Underworld Undead Death Goddesses, are deliciously grisly in their eating habits, soulless in their efforts to grab souls before Charlie and the other Death Merchants can get them and relentless in their determination to regain their status and powers Aboveground. I really felt for poor detective Rivera– demons, owls, vampires and now Death Merchants and the Morrigan. I guess he didn’t know what he was getting himself into when he applied to join the SFPD. I also loved Minty’s wheels.

The 1957 Cadillac Eldorado Brougham was the perfect show-off of death machines. It consisted of nearly three tons of steel stamped into a massively mawed, high-tailed beast, lined with enough chrome to build a Terminator and still have parts left over–"most of it in long, sharp strips that peeled off on impact and became lethal scythes to flay away pedestrian flesh. Under the four headlights it sported two chrome bumper bullets that looked like unexploded torpedoes or triple-G-cup Madonna death boobs. It had a noncollapsible steering column that would impale the driver upon any serious impact, electric windows that could pinch off a kid's head, no seat belts, and a 325 horsepower V8 with such appallingly bad fuel efficiency that you could hear it trying to slurp liquefied dinosaurs out of the ground when it passed. It had a top speed of a hundred and ten miles an hour, mushy, bargelike suspension that could in no way stabilize the car at that speed, and undersized power brakes that wouldn't stop it either. The fins jutting from the back were so high and sharp that the car was a lethal threat to pedestrians even when parked, and the whole package sat on tall, whitewall tires that looked, and generally handled, like oversized powdered doughnuts. Detroit couldn't have achieved more deadly finned ostentatia if they'd covered a killer whale in rhinestones. It was a masterpiece.

Now for me the middle section tended to drag a bit and I didn’t need to see Charlie collect quite so many souls. Also descriptions of SF (while Charlie patrolled), while nice, added too much length — something needed to be edited, tightened a bit. And how did hellhounds appear in first place? Did Sophie “call” them? Were they sent? By who? I’m not sure I want to know the details behind your research on Ray’s internet search for love in the Philippines and in Ukraine. Though Lily’s ultimate romantic partner was a stroke of genius.

My final grade dips because the plot gets a little out of control at the end, I’m not sure what to think about what happens to Charlie and Audrey, while seemingly a very nice — and gifted– young woman, is slightly freaky (gotta agree with Minty Fresh there), and the whole squirrel people bit is hard to wrap my brain around. Nonetheless, I enjoyed reading about Charlie’s “Dirty Job.” B