Last week, I gave you my impressions the Kindle 3.   Lightweight, friendly redesign but with a terrible keyboard.   I promised that I would write up my thoughts about the Kindle 3 Lighted Cover

which carries a hefty price tag of $59.99 and the battery life.

Before I get into the lighted cover, I have to tell you that integrated light for ereading has been kind of a crusade of mine.   It was one of the things I liked the least about eink devices when they debuted and why I had such affection for the Sony PRS 700.

The technology of eink prevents backlighting.   Backlighting is when the light comes from the back of the screen or underneath the screen.   Eink is like a sophisticated etch-a-sketch.   There are tiny balls that have white on one side and black on the other.   The computer tells the device which balls should be black and which should be white and thus it forms letters on your screen.   The problem is that to get that really flat, paper like look, there isn’t any backlighting.   The only way you can light an eink screen is from above the screen itself. 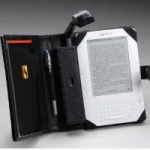 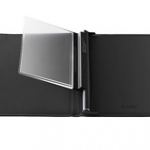 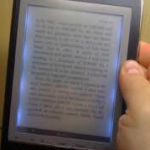 The Sony PRS 700 was the first and only eink device to integrate a light within the device.   Another layer was placed on top of the eink screen and between the two layers, lights were installed on the side which flooded the screen with light.   It was an elegant solution but the screen quality of the eink was degraded.

Apparently no one has come up with a better idea for integrating a light.   Sure you can buy book lights galore but none really satisfied and booklights are often battery monsters.   Further, it was yet another item you had to remember to bring with you.   Case manufacturers have tried to make their devices light friendly  and Sony had a cover with a light wedge which reportedly scratched easily.   Batteries were installed in the center of the unit.   The Kindle 3 Lighted Cover was a new animal altogether. 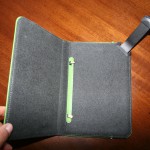 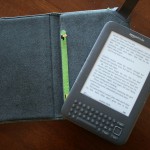 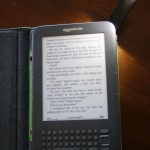 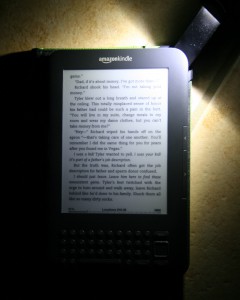 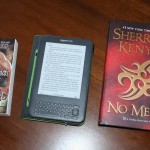 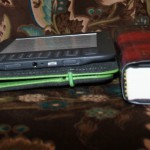 Because the sides of the cover are rigid, it feels like reading a small hardcover.   You can read it one handed but I found myself inadvertently hitting the page turn buttons if I did.   Sometimes I liked to slip my fingers behind the Kindle on the right side, but then the light doesn’t display as evenly.   It may have been better if the cover was just a little wider.

The LED bulbs can be intensely bright if you are looking at the light from the side. I usually have to lie on my side so that my body partially blocks the light. If you lie on your back, the light will pool around you and may spill some on the space next to you. If you lie on your side with the book cover’s back to your partner, the LED bulbs can blind them. The backlight is the best nighttime solution, in my opinion, because there is little side spillage of light. It’s very concentrated. A light from above or outside the device will always cast a brighter pool of light.

What about the battery life?

At this point, I will likely leave the Kindle 3 cover by my bedside and use it for traveling because I actually prefer   to read and hold the Kindle without the cover.   So is the Kindle 3 cover worth the $59.00 price tag?   It’s a pretty expensive booklight but running off the Kindle 3 battery provides a worry free way of reading at night.