Notes About the 2010 Sony Readers 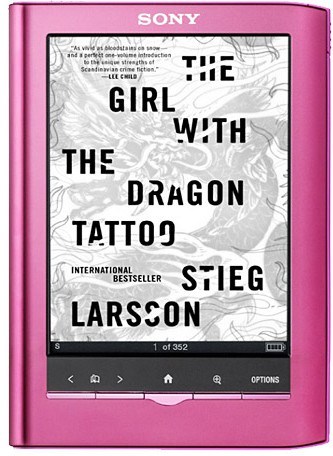 I don’t have the 2010 Sony Readers, but I am getting questions about them and so I’ll share with you the information I’ve gathered from the around the internet.

The names are a bit misleading because the neat thing about the 2010 Sony Readers is that they are all touch.   The listed items above are the main differentiating features: size, memory, and connectivity.   The battery life is about 2 weeks (Kindle has about 4 weeks without wifi/3G on).   They are all made out of aluminum with a rubberized backing.

Sony was one of the first manufacturers to present an eink touchscreen.   In the past, eink touchscreens were accomplished only by placing another screen over the eink screen.   This overlay screen would accept and transmit the touchscreen inputs.   The problem was that second screen always degraded the quality of the eink, making it appear less crisp.   This was a trade off that many felt worthwhile.

No Decline in Screen Quality

Fortunately, Sony has developed a way to provide eink touchscreens without any screen degradation.      Sony achieved this by placing infrared optical touchscreen technology which, as I understand it, means that there are infrared lasers on the sides of the device that read your finger or stylus inputs.   Thus, there is absolutely nothing on top of the Pearl eInk display, just like on the Kindle.   If you look at Slide 2   from PCMagazine, you can see the clear difference between the former Sony PRS 600 and the Sony PRS 650.

This is really exciting to me because I think it presents a clear way forward for the color eink screens and I would expect that the next generation of eink readers would all incorporate this type of screen including the Kindle and the nook.   I saw the Mirasol color eink screens at the Tools of Change convention in February of this year and the screen was gorgeous but I worried that adding another layer would decrease the quality of the screen.   Given this innovative use of infrared sensors, I no longer have those concerns.

Because of the touchscreen, you can easily draw on the eink screen of the Sony Readers and take notes with the stylus or use the onboard keyboard to type notes.   Sony does have software that helps to predict the word that you are trying to type (like many phones).

Turning pages is an easy swipe to the right or to the left.  Touch a word and the dictionary definition pops up at the bottom.

Nook has no organization and the Kindle has a fairly lame kind of organization based on folders on the Kindle device. Sony’s organization of ebooks is called “collections” and is based on “tags”.   This is so much easier because you can tag your books using a software program like Calibre (you may have to reconvert to embed those metadata changes) and then send those files to the device. It is much faster and easier for readers.

The major drawback is the price.   The Pocket edition is $179; the Touch is   $229; and Daily Edition is on sale for $299 (but not currently for sale).   The Kindle 3 (comparable in screen size with the Touch) is $139 and the nook is $149.   Neither the Kindle or nook have an eink touchscreen but the Kindle and nook both have wifi at the low end pricing and 3G at the high end, which is still lower than the Sony readers.

Another drawback is the price of books. For non Agency priced books (books priced by the publisher and not allowed to be discounted), Sony’s prices are often 10-20% higher than Amazon or Barnes and Noble.

Which leads me to the issue of availability.   While Sony accepts standard epub, Amazon only sells AZW/TPZ (a form of mobipocket) and Barnes and Noble only sells PDBs or a proprietary version of ePub which can only be read on nook related software or devices.   Thus, you can shop almost anywhere but NOT Amazon and Barnes and Noble.   Sometimes Amazon or Barnes and Noble may be the only places where you can get the ebook.

The final drawback is connectivity. Only the Daily Edition comes with connectivity.   The Pocket and the Touch do not have wifi or 3G unlike the $139 Kindle 3 and the $149 nook.   Wifi or 3G allows you to buy books anywhere you have a connection.   With the Kindle you can email yourself books or other documents.

Thus the question will be whether the eink touchscreen is an important enough feature to overcome price, availability of content, and connectivity.   The availability of content and price of books problems can be overcome if you learn how to strip the DRM from a BN book or a Kindle book.   The connectivity issue, though, is a little more difficult.   You would have to move up to the Daily Edition and pay, at least, $100 premium for the touchscreen feature.