Dear Jane: Why Aren’t Penguin Books in the Kindle Store

I can’t find the most recent Ilona Andrews, Lisa Valdez in Kindle format! Why not?

Carolyn (and many others)

The Short Answer. You should be finding the books by Ilona Andrews, Lisa Valdez, and others in the Kindle store. If you don’t immediately see a Kindle link when doing a regular search, go to Books and select “Kindle Books

” and run your search there. 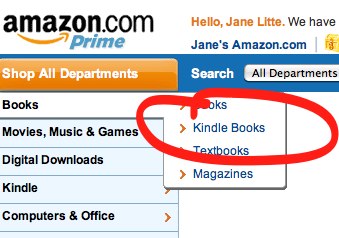 Under the traditional form of selling, the publisher sold the digital book to the retailer (or store) like Amazon or Barnes and Noble and then retailer/store would set the price for the readers. Amazon began discounting all the hardcovers at $9.99 and that made publishers’ upset and scared. The publishers were upset because Amazon seems to control a lot of the ebook market. The publishers were scared because they felt that people’s valuation of books were declining. A lot of readers began to demand all books be less than $9.99.

When Apple announced that it was going to get into the digital bookselling market, it introduced a pricing scheme wherein the publisher sets the price and the retailer/store gets a commission much like a real estate agent gets a commission when selling a house. Publishers decided that they would require every retailer out there to comply with this new model of pricing which they called “Agency Pricing”. This meant that every retailer/store out there would have to sign new contracts with publishers.

Some retailers/stores were able to come to agreements with publishers right away but Amazon and Penguin could not. From April 1 until approximately May 26, Penguin books were not in Kindle format. On May 26, an announcement appeared in an online newsletter called Publishers Marketplace that Penguin and Amazon had reached an agreement and the Kindle versions of books like Magic Bleeds and Patience showed up in the Kindle store.

Some retailers/stores like Fictionwise rely on a third party to feed the books to you. Fictionwise and Books on Board and several other online bookstores rely on Ingram. As of yet, there haven’t been any announcements that Ingram has been able to come to terms with the Publishers.   New agreements are announced quite often.   For example, Books on Board started carrying Penguin books after a month or so hiatus.

Lack of agreements is why the iBookstore doesn’t carry any Harlequin, Random House (One Dance with a Duke by Tessa Dare, His at Night by Sherry Thomas), Kensington titles because those three, among many other publishers, have not gone to the Agency Model and that is the only way that Apple will currently sell publishers’ titles.

The Agency Model has only been implemented in the U.S. If you wonder what a digital book will be priced at, you need to look at the hardcover price. Apple has set the pricing guidelines as follows and this is the price that each retailer that has an agreement with the publisher will use:

Full right to price without Apple restrictions exists for:

Books that do not have a print equivalent.

For Mass Markets or Trade Paperbacks

With Agency Pricing, I thought we got rid of comparison shopping. Why are the prices different at Amazon and Barnes and Noble versus Sony, Deisel eBooks, Kobo Books and others? Did Amazon and BN sign some special deal that they can give discounts? Is it because they have special readers?

The Long Answer.   With the Agency Model, the publisher is supposed to be the seller and therefore, sellers of products must collect sales tax.   The rule on sales tax is that wherever there is a significant business presence (also known as a “nexus”), the seller must collect a state sales tax.   For example, if your town does not have a Barnes and Noble and you order books online from that store, BN is not required to collect sales tax from you because BN does not have a significant business presence.

Apparently some publishers feel like they have significant business presence in many, many states.   Some retailers like Kobo and Sony add the tax into the price of the book which is why it looks like a book at Sony or Kobo is priced 5-9% higher than at a site like Amazon.   But the end result is the same, you have to pay tax according to your state tax requirements no matter where you shop.   Of course, you may live in one of those states that don’t require sales tax and then it probably behooves you to shop at those places that collect tax at the end of a transaction.   According to the Kindle site, the following publishers are collecting tax from the following states:

Dear Jane is a weekly column where you ask the questions about digital books and I answer them.   Any question is welcome.   Send it to jane at dearauthor.com. Happy Reading!