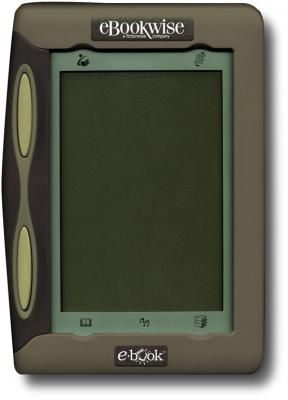 According to eBookwise, the typical number of ebooks per device is as follows:

The pros for the eBookwise are the cost, the size (slightly larger than a paperback), touchscreen, modem, and the integrated backlight. Samhain executive editor, Angela James, and blogger/reviewer, Holly, has an eBookwise. The modem allows you to hook up to a phone line and purchase books from the eBookwise store.

The cons are that to enjoy the use of the eBookwise, you really need a memory card and a conversion program that will allow you to convert html, Microsoft Word docs, plain text, and rich text format into the proprietary IMP format that the eBookwise recognizes. There are three conversion programs which work essentially the same: eBookwise Librarian $14.95), GEB eBook Librarian ($15), and eBook Publisher (free but requires technical knowledge). You can do one by one file conversion online for free as well.

Additional cons for the eBookwise is that the LCD screen is not easily readable out of doors; has one of the smallest screen sizes of a dedicated reader at 5.5" diagonal; does not read PDFs without conversion, limited options in terms of font and font size, and the Smartmedia card is expensive, low in memory, and is not easily available in local stores. 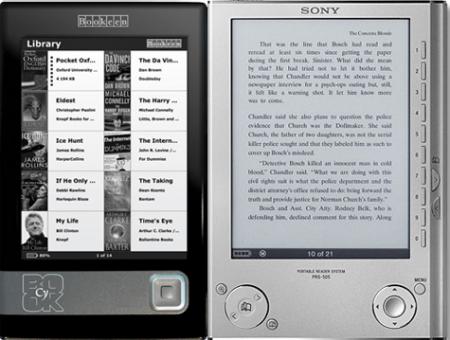 Generally, both devices contain a 6" diagonal eink screen (SVGA 800×600 4 grey scales). Eink is a superior ereading experience because of its paperlike quality. In the outdoors and with bright light, the eink really shines. Particularly amazing is the length of battery life. Because these e-ink readers use battery power only when the page is turned, it can last for days. My Sony Reader lasted three weeks with me reading at least an hour each day with some days having two or three hour usage. I even went on vacation with my Sony Reader and left the charger at home due to the longevity of the battery.

Both devices have an SD memory slot. SD cards are widely available and come in a variety of memory capabilities. At pricegrabber.com, a 2GB SD card costs $19.99 from Circuit City. A 2GB SD card will fit over 2500 books.

The major differences between the Cybook and the Reader are in software and the formats each device will read.

I have no idea which device would be a better purchase. On the one hand, Sony’s device is sold in the US and easier to get serviced if something goes wrong (i.e., you don’t have to ship it overseas). On the other, Mobipocket is more widely used format but that can be circumvented by using a conversion program to convert books in the LIT format to html. I read one user’s opinion that the Sony Reader had a heftier feel to it. If the Bookeen device feels cheap that would make a difference to me. For Mac users, the Sony is recognized as a USB mass storage device meaning that if you plug it into your USB port, your MAC will think it is just another storage device and you would be able to drag and drop files onto the Reader. With the Reader being $50 cheaper, I would probably buy that over the Cybook Bookeen.

MobileRead has a specific review of the pros and cons of the Sony Reader and the NAEB has one of Bookeen’s Cybook.

The iRex Iliad is a very expensive eink device at $699.00. The reason for the increased price is three fold. First, the screen size is bigger. It is 8.1" diagonal with 16 levels of grayscale (versus the 6" 4 levels of grayscale of the two previous eink devices). Second, the device has a touch screen that allows for editing of documents. Third, it has built-in wi fi and an optional Ethernet connection for direct access to the internet.

The device recognizes the following formats: Mobipocket, PDF (without encryption), HTML, TXT, JPG, BMP, and PNG. While it can connect to the internet via wi fi, it lacks an official browser. Email services like yahoo and gmail are not accessible and many sites do not render well.

Because it allows for editing and has wi fi accessibility, the battery lasts much less than that of the previous two devices. The iRex website suggests a 12 hour maximum. Using the touchpad for annotation, reading, and accessing the internet nets about 5 hours according to one MobileRead user.

MobileRead has a more fullsome review with several thumbnail images of the iRex Iliad in action.

The Sony Reader for PC users and the Bookeen for Mac users but only because Bookeen supports the Mobipocket format. The problem with DRM is that it prevents consumers from actually buying the best device for their dollar. At $299, there doesn’t appear to be a sufficient reason to spend $50 more to buy a device from France that will have to be serviced in France if there are any problems. A PC user can avail herself of the Lit books (using a lit conversion program) that is available at nearly every ebook store but a MAC user cannot.