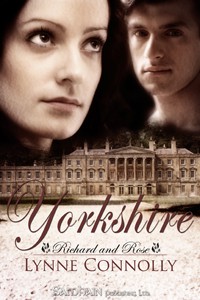 When Jayne and I first began reading ebooks, one of the first epublished authors we read was Lynne Connolly. Actually, it was Jayne, being adventurous, who paid $17.00 to obtain a paper copy of the book. Jayne recommended it to her friends. Jan picked it up next and after all the chattering between Jayne and Jan, I bought it as well. Today, Lynne Connolly’s Rose and Richard series is finally being re-released through Samhain Publishing. Angela James has offered up 10 free copies of the first in the series, Yorkshire. The following is a recreated chat that Jayne, Jan and I had many moons ago about the series. I tried to edit out much of the spoiler information and keep the discussion primarily to Yorkshire, although, there is some overlap. Please drop a comment if you are interested in a free copy.

We’ll let Jayne start out with her plot summary:

What we get is a period (Georgian) detailed look at two people falling in love against some pretty tall odds. Richard Kerre is a handsome lord who could have his pick of women. Rose is frankly amazed that he seems to love her. And Richard is floored to have finally discovered his soulmate when he least expected her, and when he’s in no position to make her an honest offer. He’s contracted to marry a society beauty and in those days, a signed marriage contract was legally binding and if broken, could lead to expensive legal payouts and being shunned in society.

Rose’s family also has doubts about Richard’s true intentions. He’s known as a seducer and worldly man. Why would he choose a plain, twenty-five year old, on the shelf, provincial nobody? To add to that, there is an old scandal involving Richard’s twin brother and a possible one if the identity of a killer is not determined. Though it was originally listed as an out of niche romance/mystery, the mystery actually takes second place to the romance though there are already two more books in the series and perhaps they contain more of that element.

Connolly has done her research and I felt I was in the 18th century. The characters don’t act like transplanted 21st century people. Richard has a habit of glacial aristocratic hauteur that can depress the most forward social mushrooms. There is no sign of hobnobbing with the servants and everyone knows his place in society. It’s a fascinating world to look in on but one that has its moments of unease for a 21st century reader.

I think societal rules were a bit more relaxed than what we’re used to in historical regencies. Plus Richard was an aristocrat and Rose was gentry so they could bend them just a bit if they wished and took precautions to mollify the sticklers. I do love how Richard and his family use their consequence to kind of get their own way at times. And though all are polite to servants and underlings, they never, ever indulge in democratic flights-of-fancy of any degree of equality nor do the servants expect it.

I wasn’t sure what to expect of these, because to be honest from Connolly’s online posts I always felt she cared more about historical detail than what to me was important in romance, a great story with emotional resonance. But boy was I wrong. Once I started reading them I literally couldn’t put them down.

Richard and Rose were more real to me than most characters I read in romance, and I felt along with them. They were very romantic. And while they acted of their time, they didn’t behave like they had to constantly be proper and within the confines of societies rules (what I’d expected). To the contrary, they both see what they want, they examine the consequences, then accept them and go for it. I liked that. I liked the honesty between the two, and how Connolly never resorted to misunderstandings or TSTL heroine actions to further the plot. All of this served to create a romance I could really believe it, which made it all the more effective.

I enjoyed the settings, because she drew them carefully, the first book more so than the second. She made the time feel more real than it often feels in romances. She doesn’t always supply a lot of detail and lush prose, but she supplies all the necessary detail, and it makes you feel like you’re in the manor having dinner with the characters. It’s really a wonderful piece of worldbuilding. And accurate. I thought I’d caught her three times and she was correct each one.

RE: the first person story telling

Jayne: Richard is a great hero and I never felt like I was in the dark about his thoughts after that first little bit in Yorkshire when Rose is still trying to figure out what’s going on. Remember, he loved her first and it took her a bit to get over her awe at his appearance (I love the way he uses that to control what people think about him).

Jan: I felt that way about all the characters really, that I understood their motivations and emotions despite the fact that we never see inside their heads. It seemed skillfully done to me.

I loved Richard’s use of awe too. He’d planned and used his status so well to keep everyone at bay. It made the times when his mask slipped so much more meaningful. And I also loved the fact that he used his advantages ruthlessly, just as a man of the times would, without PC interferences.

Jane: Richard is a spectacular hero. I loved his uppityness and how Rose couldn’t change him if she tried, but it was clear over the course of the books that love was changing him – making him more open, perhaps even more trusting.

Jane: Gervase. Fabulous and heartbreaking. Connolly did a great job of turning conventional thinking on its head with these twins. Gervase was observed by outsiders as the match for Rose and not the popinjay. Connolly reinforced the idea through small touches such as the horse, the clothing, even the mannerisms, that Gervase was the masculine, hearty one while Richard was the snuff pinching, makeup wearing, bewigged dandy.

Jayne: “Waiting for Gervase!” He just has to get his own love interest or I’m going to explode with frustration. He’s really a great character.

Jan: I think the rules were looser then too. But what I liked so much was that they took the rules into consideration, then made the very difficult decisions they did, knowing what the consequences would be to themselves and their families. It made their passion seem much more real and overwhelming.

Jayne: And I like that Lynne makes sure the readers know exactly what those consequences would be. Not only for R/R but for their families as well.

RE: The sex scenes

Jayne: Lynne really has been able to slowly but realistically show their growing love and comfort with it and each other. The love scenes were hot. None of this “no sex please, we’re British!”

Jan: Oh, no kidding they’re hot! That was another thing I noticed. Normally in romances the first sex scene is all that the writer really concentrates on, and after that it’s kind of “then they had sex again in another position”. Here, as their intimacy grows in other ways, it grows in the sex scenes as well, and they are more and more fulfilled as the series progresses. Which is how it really is in good relationships.