Comparison Review of the Nook Tablet and Kindle Fire

I haven’t used either devices very long. I picked up the Nook Tablet on Tuesday and the Kindle Fire on Wednesday. After using both for this short time, I long for a 7″ iPad but the iPads are twice as expensive as the Nook Tablet and Kindle Fire and to compare the 7″ models to the 10″ iPads is comparing apples to oranges. They are simply not the same thing.

The Nook Tablet and Kindle Fire are essentially media consumption devices. This means that creating documents or writing long emails is not advisable. Neither allow for pairing of a keyboard with the devices thus in order to interact you must use the on screen keyboard.

Text input (aka the onscreen keyboards) 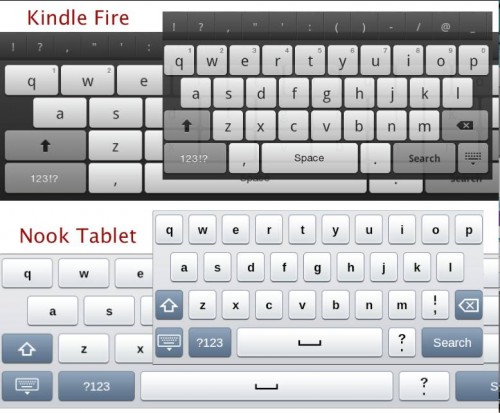 So yeah, I won’t be sending out any emails of importance from either tablet device.

The important settings are easily available on both devices such as wifi access, brightness, volume, and screen lock with an easy tap on the menu bar of the Nook Tablet on the bottom and the settings icon on the top menu bar of the Kindle.

To maneuver through the content both devices have provided carousels. The Kindle carousel is on top. The Kindle has a seemingly endless number of shelves that allows you to store favorites: apps, books, magazines, or video regardless of whether the content is sideloaded or purchased directly from Amazon. 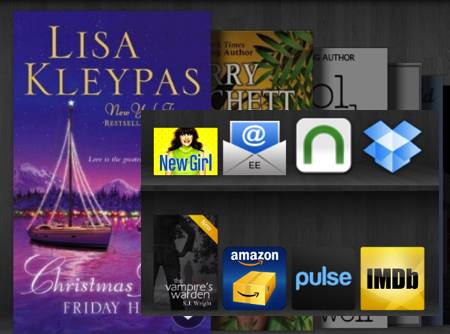 The Nook carousel is smaller and on the bottom. The Nook has three home pages and you can drag books and magazines you have purchased onto the home pages. Apps, however, stay in the carousel or are accessed through the App tab. 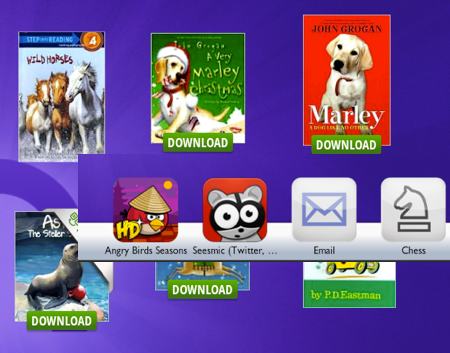 Both devices have a problem with upside down portrait and upside down landscape when watching video. They only allow one portrait view and one landscape view as opposed to the iOS which allows you to view video in all four views.

The default reading apps for both devices provide the same standard tap zones: right to go forward and left to go backward. You can also swipe right and swipe left anywhere for next/back.

Press and hold a word or press and drag to highlight a section. You are given a note/highlight/search option. With the NookTablet, you are given a “share” option.

On the Kindle Fire you can change the font style, typeface, 8 different font sizes, 3 margin styles and three color modes (white on black, black on white and black on sepia).

A tap in the upper right corner leaves a bookmark. Tap again to remove the bookmark.

The Nook Tablet boasts 16GB of memory which is twice as much as the Kindle Fire. Only 1 GB of the Nook Tablet is available for non Nook purchased content. Given that Barnes and Noble does not sell audio or video content, only 1 GB is available for the non book, non magazine content and 12 GB for BN purchased content. 3 GB is for system. Thus that 16 GB of memory space is very misleading. The big benefit is that the Nook Tablet has an external micro SD slot which will read cards up to 32 GB in memory. One micro SD card will hold about 15 movies. The micro SD cards range in price between $12 to $40. (It’s a good item to pick up during Black Friday and Christmas sales).

The Kindle Fire has only 8 GB of memory space, 2.5 which appears to be for system and 5.5 for personal content. It has no external memory slot. Instead, Amazon expects you to make use of the cloud. It stores movies and videos that you purchased at Amazon but it also allows you up to 5GB of space for personal content. You can purchase additional space such as 20 GB for $20 per year and this also gives you unlimited space for music. Unfortunately, you can’t easily sync your Kindle Fire with the Cloud drive (except for music). If I upload a document to Cloud, I can access it via the Kindle Fire web browser and it is saved in the “Docs” tab. That said, I can’t stream any personal video.

Even though Nook Tablet internal memory has only 1GB, the external memory slot is meaningful if you want to add your own content.

I did not run any specific tests, but the Nook Tablet definitely had more battery power. Both devices come with chargers although the Kindle Fire does not come a USB cord. If you want to get something on your Kindle Fire, you can use any standard micro USB cord for transfer.

Both the Nook Tablet and the Kindle Fire can only be charged with the included adapters. The charger with the Fire is 1.8 amps and most USB ports are rated at .5 Amps. The iPad, for example, won’t charge off many PC USB ports because it needs a 1 Amp charge. The Kindle Fire could charge off a regular micro USB if the amperage supplied by the adapter is nearly two. The wall charger included with the iPad, for example, is rated 2 Amps. You can find 2 amp USB chargers at many electronics stores.

The Nook Tablet, however, needs to be charged with its special elongated micro USB port.

The design of the Kindle Tablet is like one big slab. Ned said it was a very masculine design. It’s heavy with a rubber back and very slightly rounded edges. The front is all glass.

The Nook Tablet looks exactly like the Nook Color down to the silly loop. The one change is that the front trim piece is slightly rubberized like the back and the edges are all rounded. The Nook Tablet is much more comfortable to hold than the Kindle Tablet. That said, I have to take the Nook Tablet back because the upper rubber frame is not fully soldered onto the rest of the device because when I press down, it makes a clicking sound and you can see that the frame is slightly separated from the base. Maybe that’s a feature? 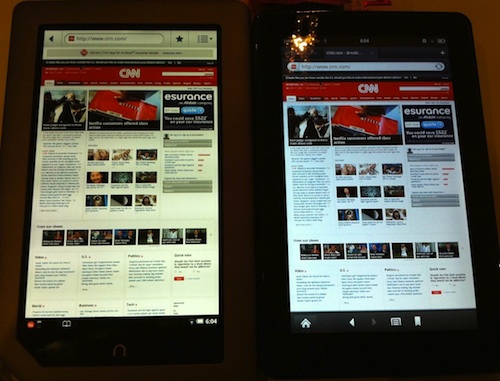 I thought the screen on the Kindle Fire was slightly clearer than that of the Nook Tablet. (Click for larger image). The Nook Tablet is less reflective which made reading outside much easier (although not as good as an eink or the iPhone). The Kindle Fire’s screen is reflective enough to serve as a mirror in a pinch.

The Nook Tablet has more processing power and more RAM and one area in which this should show up would be in the web browsing but Amazon’s SILK processor does its job here. When you visit websites on the Nook, from time to time you will get the mobile version. On the Fire, it is the full fledged web page. The sites load slightly slower on the Fire the first time but the second time you visit the same site, it is very zippy.

Navigating on the web, however, isn’t as smooth as from a laptop or an iOS device. On the Nook Tablet, for example, on the google search page, when you tap it you can’t tell if you’ve tapped on the link and it can be frustrating. This isn’t true for all pages. On the Fire, when you double tapped to increase the text, it was like an animated increase instead of an immediate one.

I could not tell a difference between the two paid for games.

The Amazon App Store is less expensive and has so many more apps.

Amazon is the clear winner in this category. Amazon sells music, videos, has a more robust app catalog and better prices all around. The only way to get video on the Nook Tablet is either subscribe to HuluPlus or Netflix or create your own digital files from physical media. Amazon offers free thousands of free movies and television shows to its Prime membership in addition to video purchases and rentals plus the ability to use HuluPlus or Netflix.

Barnes & Noble sells no video nor music. Amazon has been consistently undercutting prices at Apple by selling songs for $.69 and many albums for under $10 and many of the most popular albums for $5. B&N offers Pandora for audio streaming.

Sideloading refers to adding content not purchased through the device itself. It is far easier to sideload with the Fire. The Fire’s email app allows you to send and receive attachments including video, apk files, books, etc. The nook tablet does not. I was able to easily open PDFs I found on the internet with the Kindle Fire. I had problems with the Nook Tablet.

The Kindle Fire and Nook Tablet are actually as open as the Kobo Vox purportedly is. You can sideload almost any Android app that you can find an “APK” for. Brian wrote some great instructions up. The Kindle Fire is the easiest to add additional Android apps. You download a file explorer like ES Explorer (free) from the Amazon App Store and then google for your .apk files or email them to yourself or create a folder in Dropbox where you will store the apps. The sideloaded apps act just like the ones that are purchased from Amazon App Store and they show up in the App folder and appear in the main carousel and can be favorited. Sideloaded content is treated nearly the same as official content. I found, however, I could not mail myself a mobi file or download one from the internet and open it in books.

Apparently the Kindle Fire does not use the Personal Document service that Amazon has created for Kindles. The Kindle Fire also does not support collections at this point.

Through some research, the folks over at mobileread solved the problem. You need to download File Expert from the App store, choose the book you have downloaded, and under Choose Applications, select Amazon Kindle. The book will not open. Instead, tap Home and Books. Your mobi book will have magically appeared.

The Nook Color is a little more difficult. It required a special link created by an XDA Developer forum user. Additionally, some of the apks that worked fine on the Kindle Fire did not work on the nook. The XDA Developer forum had links to apps that worked. Once the apps are on the device, however, they don’t show up in the app folder. Instead, you need to install a launching program like “go launcher” and then when you want to access those sideloaded apps, you have to use the search feature to find open Go Launcher. This is a hassle.

Sideloading is much easier with the Kindle Fire. 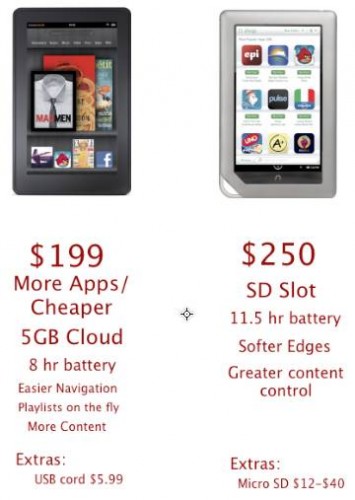 If you are going to make your own videos and you really want that extra memory slot, go for the Nook Tablet but there is just more and cheaper content to use on the Amazon Fire and I do think it is a bit easier to navigate (although not by much). I love the 7″ size. It is perfect for nighttime reading and watching video. So perfect, in fact, that I have been watching far too much video and reading far too few books (only one since Tuesday and that was Joanna Chambers’ A Lady’s Secret which I enjoyed quite a bi). The operating system isn’t as refined as that of the iOS but the screen size makes it a better deal.